The European Parliament, Mass Media and the Search for Power and Influence 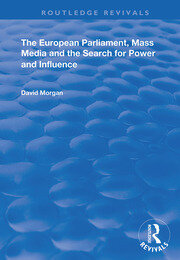 The European Parliament, Mass Media and the Search for Power and Influence

First published in 1999, this study will examine the nature of the difficulties in the UK, Belgium and Ireland and the accompanying need for parliamentary communication, setting that parliament within an institutional, historical and political EU context and examining its ability to mobilise popular support through the use of mass media.