The European Union and International Development
The Politics of Foreign Aid 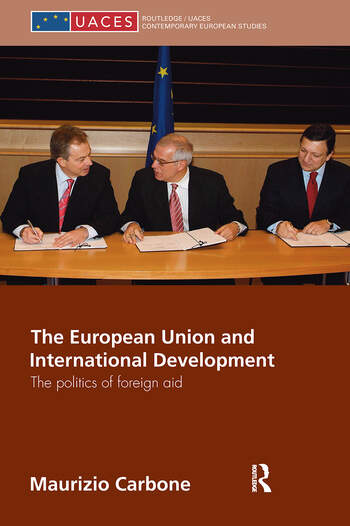 The European Union and International Development: The Politics of Foreign Aid

The European Union is a leading actor in international development, providing more than half of the world’s foreign aid, but also a unique case, combining the characteristics of a bilateral and a multilateral donor. Despite the general acknowledgment that policy coordination substantially improves both the effectiveness of foreign aid and the visibility of the EU in the international arena, Member States have consistently resisted any intrusion into what they consider a key area of their national sovereignty. The increases in volume of aid, the ambitious agenda on aid effectiveness, and the adoption of the European Consensus on Development indicate a change of direction.

Demonstrating that development policy may provide fresh insights into EU integration theory, this book will be of interest to students and scholars of European Politics and International Development.

Maurizio Carbone is Lecturer in the Department of Politics at the University of Glasgow, UK.

The book represents a valuable contribution to the existing literature not only for the convincing leadership model developed in its pages but also for the choice of the case studies 'not limited to specific geographical areas' and for the analysis of the multiplicity of Member States' approaches, traditions and performance in developing countries. Furthermore, the book provides additional evidence that integration theories can be successfully used to explain the EU's external relations and that the logic of consequentialism and the logic of appropriateness coexist and are simultaneously at play in EU policy-making. It remains to be seen whether Carbone's leadership model might be applied to other (external) policy areas, such as trade or neighbourhood policies. For this reason, the book is highly recommended reading not only for scholars and practitioners interested in investigating and evaluating EU development policy but also for those interested in the international role of the EU.

Carbone aims to bridge two theoretical divides in EU studies: one between intergovernmental and supranational understandings of EU politics, and a second between rationalism and constructivism....

With The European Union and International Development, Maurizio Carbone has provided a very interesting analysis of development assistance at the EU level. The book clearly fills a gap in the literature on international development. By focusing on the role of the European Commission, and by formulating a set of conditions under which this central actor can provide leadership, Carbone has advanced theorizing on the EU, as well as international organizations in general. Carbone's study will prove to be of interest primarily to two audiences: those interested in decision making in the EU, and those interested in the 'politics of foreign aid'. By providing a set of testable assumptions on leadership in a supranational political framework, the study is particularly useful to researchers who wish to understand the role of 'political entrepreneurs'.

Traditionally, the intergovernmentalist, supranationalist, rationalist, and constructivist schools of thought dominate the study of politics in the EU. By developing an innovative leadership model, which emphasizes the roles of institutional entrepreneurs and internal fragmentation as well as the use of a repertoire of tactics by the European Commission, Carbone (University of Glasgow, UK) goes beyond these traditional approaches. Accordingly, he sets the stage for an innovative understanding of the radical and unexpected turns of the EU's integration of different development policies in recent years. The issues of volume of aid, the provision of Global Public Goods, and the untying of aid to the Least Developed Countries (LDCs) show that for the European Commission to emerge as an assertive policy maker the institutional entrepreneurs within a Directorate General (DG) must form a united front able to push certain issues on the policy agenda, minimize fragmentation within the European Commission, and engage in different modes of strategic behavior vis-Ã -vis the member states during policy initiation, formulation, and adoption phases. As illustrated by the policy cases, the central variable to explain the European Commission's ability to decisively shape policies depends on the degree of unity within it. Summing Up: Recommended. General readers, upper-division undergraduate students, and up