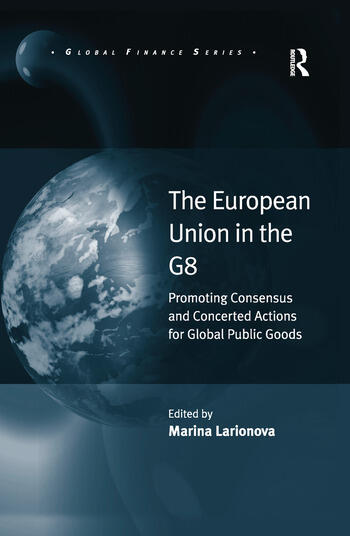 The European Union in the G8: Promoting Consensus and Concerted Actions for Global Public Goods

An eminent international line up of experts in law, political science, economics and history examine the dynamics of the European Union's (EU) development as a collective member of the G8 and G20. Each contribution provides a methodical and much needed insight into the external and internal factors influencing this evolvement process, the options for these institutions to reform and collaborate and the future role of the EU in this new system of institutions. Part One makes an introduction into the topic of the EU representation in the G8 and the main concepts explored in the book. Part Two presents an analytical framework for exploring the EU actorness in global governance institutions. Part Three examines the transformation of the G7/G8 system, the emergence of the G20 as a leader's forum and the EU role in the process. Part Four provides an in-depth analysis of the EU contribution to critical cases of global governance including issues of energy, finance, development, peace and security. Part Five analyses the main trends in leadership and models of engagement. Contributing to key contemporary debates, this book is a lucid replenishment to the existing literature on global governance and an excellent resource to studying the EU's role as a global actor.

'A more than timely analysis of how the EU, with its new foreign policy machinery, acts within a quickly evolving G8/G20. A crucial analysis of Europe's crucial contribution to global governance.' Sven Biscop, Egmont Institute & Ghent University, Belgium ’This collection of timely and provocative articles makes a signal contribution to the study of the changing role of the European Union in global governance, illustrating how the EU has become a truly global actor in a short period of time. I recommend this collection to all serious students of international politics.’ Richard Connolly, University of Birmingham, UK '[The European Union in the G8] is a product of a fruitful cooperation among leading international scholars in the field of global governance. Another book belonging to the Global Finance Series by Ashgate, this edited volume goes well beyond the examination of the governance of international finance... This book is a valuable contribution to the still developing literature on the EU and its function in global governance, and is useful for experts and students alike. It answers questions and interprets past and current developments, and allows for the conduct of a debate on the future direction of global governance and the position of the EU in it.' LSE Review of Books 'The issues raised at the G20 in St Petersburg in September 2013 and the turmoil that has ensued over the question of a military intervention in Syria epitomize the relevance of Larionova’s edited volume of essays. The book explores the role and influence of both the EU and the G8 (and more recently the G20) in global governance and the relationship between these two global actors. ... This book is a valuable resource for those who seek to understand the dynamics of global governance and the roles and responsibilities of the G8 and the EU in ’global governance development, direction setting, deliberation and delivery’.' Journal of Contemporary European Studies '... the volume