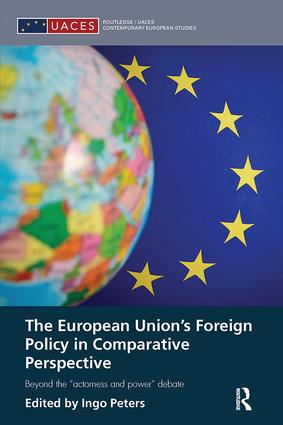 Beyond the “Actorness and Power” Debate, 1st Edition

This ground-breaking volume provides a new perspective on the EU’s foreign policy and offers a reconstruction of EU research that extends beyond narrow-minded concepts of ‘power’ and ‘actorness’. Focusing on two intertwined research questions, it presents a more sustainable base for studying EU foreign policy:

‘The edited book gently chips away the theory beyond merely looking at the power and actorness debates to reveal how the EU actually performs across a range of foreign policy issues by taking a comparative perspective that allows one to analyse between the declatory and operational European Union. Taking a case study approach across the three dimensions of governance/regulatory frameworks; peace and state building and crisis management and missions, it makes for compelling reading as it offers an insightful audit as it unpacks the foreign policy performance of the EU by drawing attention to challenges for collective action framed between normative discourses and interest articulation. It is informative and relevant for the practitioner and the researcher.’ - Professor Ummu Salma Bava, Centre for European Studies, Jawaharlal Nehru University, India.

'Overall, this book is interesting for both those who seek a comparative analysis of the EU’s foreign policy and those who pursue more detailed research on the EU’s role, power and infl uence in international affairs.' - Manrico De Vincentis, The International Spectator, 2016

Introduction: The European Union’s Foreign Policy ‘Actorness and Power’: Foundations of and Challenges for a Comparative Research Design Ingo Peters Part 1 Foreign Economic Policy 2 IMF Reform Negotiations in the G20: Comparing Actorness and Power in the Foreign Financial Policies of the EU, the US and ASEAN Steffen Murau and Kilian Spandler 3 The EU in Global Chemicals Governance Katja Biedenkopf 4 The External Reach of the EU Regulatory State: Norway, Russia and the Security of Natural Gas Supplies Nick Sitter and Svein S. Andersen Part 2 Common Foreign and Security Policy/ Peace- and State-building5 The European Union and the Balkan Wars:

Zivilmacht Europa and the "Problem from Hell" Adrian G. V. Hyde-Price6EU Performance As A Regional Security Actor: Comparing ENP South to NATO’s MENA Policy Pernille Rieker 7 The EU and the US Reactions to the Arab Spring 2011: (New) Response to a Changing Middle East and North Africa Assem Dandashly Part 3 Crisis Management, Missions and Operations8 State-Building and Police Reform in Afghanistan:EU and US Engagement in Comparative Perspective Dinoj Kumar Upadhyay and Maria Pawelec 9 The European Union’s Foreign Policy in Comparative Perspective: The EU and the US in the Sahel Ronja Kempin, Ronja Scheler, and Stefan Steinicke10 Building a Comprehensive Approach "Bottom Up": A Systematic Comparison of the EU’s, the US’ and NATO’s Strategies for Providing Security to the Horn of Africa Bjørn Olav Knutsen and Eirik Dønjar11 The European Union, the United Nations and the United States Missions and Operations in the Democratic Republic of Congo in Comparative Perspective Ingo Peters and Madina Diallo Conclusions: Actorness and Power of the European Union in Comparative Perspective Ingo Peters

Ingo Peters is Associate Professor of Political Science at the Freie Universität Berlin and Executive Director of the Center for Transnational Relations, Foreign and Security Policy, Germany.