The Evolution of Policing
Worldwide Innovations and Insights 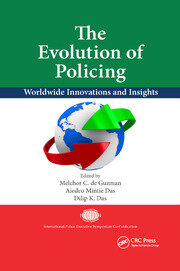 The Evolution of Policing: Worldwide Innovations and Insights

Each year, the International Police Executive Symposium (IPES) holds a global conference for police scholars and practitioners to exchange information about the latest trends in police practice and research. Drawn from recent proceedings, The Evolution of Policing: Worldwide Innovations and Insights explores major policing initiatives and evolutions across the globe and presents practical insights on how police are retooling their profession.

With insight from both police practitioners and scholars, the book covers a range of topics, including:

A survey of the evolving roles and practices in policing across the world, the book is written in a style accessible to a wide audience. The expert insight will assist scholars in seeking directions for their current research endeavors while at the same time enabling practitioners to implement new programs or fine-tune their current practices.

THE EVOLVING NATURE OF POLICE ROLES IN DEMOCRATIC AND DEMOCRATIZING SOCIETIES. A Clash of Modern Professionalism and Oriental Despotism: The Case of Iran, 1878–1979. Challenges of Police Reforms In Lesotho. The Soap Opera Rationale: A Complementary Information Management Construct In Police Work Practice. Impact of Selection and Distrust in Construction of Professional Police Identity. Human Rights and the South African Police Force: Are The Red Lights Coming On? THE EVOLVING NATURE OF COMMUNITY POLICING. Community Policing: The Bahamas Model – Drawing a Thin Line between Community Policing and Traditional Policing. The Community Involved and Planned Policing Model: An Alternative to Traditional Policing in Trinidad and Tobago. Community Policing: A Panacea or a Pandora’s Box to Criminalities in Nigeria and South Africa. Meeting with Citizens: New Local Dimensions of Dialogue between Citizens and Police Officers. Community Policing in Portugal: The Long and Winding Road. THE EVOLVING NATURE OF POLICE TRAINING AND PERSONNEL MANAGEMENT. Authoritative Language in Police Training: Style in Police Students’ Memoranda. Job Expectation, Adjustment, and Coping Mechanism among Women in Two Police Forces in India. Efficiency of Simulated Realistic Scenarios to Provide High Psychological Stress Training for Police Officers. Development of Ghana Police Service Personnel and Performance. Police Writing Techniques in Reported Interviews. THE EVOLVING NATURE OF POLICE OPERATIONAL MANAGEMENT. Exploring System Transition in the Police Organization: The Case of the UK Police National Database. Exploring the Implementation of Head-Mounted Camera Technology in Volume Crime Scene Investigation. To What Extent Are All Policing Problems Wicked? Examining Police Integrity: Categorizing Corruption Vignettes. Representations of the Police in the British media: "Hard" Cops and "Soft" Cops. EMERGING ISSUES. <

Melchor C. de Guzman, PhD, is an associate professor of criminal justice at the College at Brockport at the State University of New York. Dr. de Guzman’s research includes the examination of citizen participation in the control of the police. He also investigates organizational and environmental factors that influence police behavior. His most recent research includes the utilization of websites by police departments in the delivery of police services and the role of the police in homeland security.

works as a digital media/content marketing specialist. As Director of Public Relations of the International Police Executive Symposium, she organizes international criminal justice symposia, coordinating with Ministries of Interior/Justice to bring together well-known academics and top police leaders in global venues. Currently, she is pursuing her graduate studies in Helsinki, Finland.

is a professor of criminal justice, a former police chief, and a human rights consultant for the United Nations. He is the founding president of the International Police Executive Symposium (IPES), where he manages the affairs of the organization in cooperation with an appointed group of police practitioners, academia members, and individuals from around the world. Dr. Das is also the founding editor-in-chief of Police Practice and Research: An International Journal. A prolific writer (30 books, numerous articles and scholarly presentations), he is the Editor-in-Chief of two book series published by CRC Press/Taylor and Francis Group: Advances in Police Theory and Practice and Interviews with Global Leaders in Policing, Courts and Prisons.