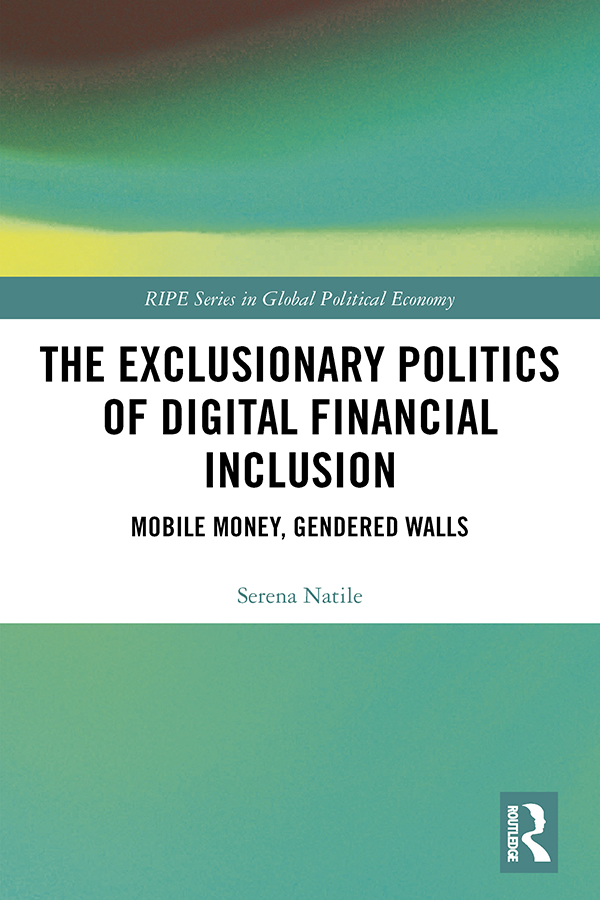 One of the most-discussed digital financial inclusion projects, M-Pesa facilitates the transfer of money and access to formal financial services via the mobile phone infrastructure and has grown at a phenomenal rate since its launch in 2007 to reach about 80 per cent of the Kenyan population. Through a socio-legal enquiry drawing on feminist political economy, law and development scholarship and postcolonial feminist debate, this book unravels the narratives and institutional arrangements that frame M-Pesa’s success while interrogating the relationship between digital financial inclusion and gender equality in development discourse. Natile argues that M-Pesa is premised on and regulated according to a logic of opportunity rather than a politics of redistribution, favouring the expansion of the mobile money market in preference to contributing to substantive gender equality via a redistribution of the revenue and funding deriving from its development.

This book will be of particular interest to scholars and students in Global Political Economy, Socio-Legal Studies, Gender Studies, Law & Development, Finance and International Relations.

"The financial, digital, mobile revolution promises a borderless and frictionless world. A swift planet; an intelligent social order, free from poverty and inequality; a prosperous global family in which those marked out by gender, race or class are no longer excluded. In The Exclusionary Politics of Digital Financial Inclusion: Mobile Money, Gendered Walls, Serena Natile takes these new developmental promises and turns them upside down. Her unflinching exploration of the dark side of our fixation on quick, individualised and privatised solutions is socio-legal critique at its best. The result is a deeply grounded, theoretically savvy and globally relevant analysis, offered up at a moment when the most urgent demands for effective redistribution are being answered with clicks and taps on keyboards and touchscreens." - Luis Eslava, Reader in International Law and Co-Director of the Centre for Critical International Law (CeCIL) at Kent Law School, University of Kent.

"This book represents a breakthrough. Many analyses of Kenya’s mobile money facility are celebratory and uncritical. This book draws on an impressive range of historical and contemporary literature to consider the implications of digital financial inclusion initiatives for gender equality. It argues that in its conception and regulation, MPESA purports to extend opportunities whilst having little redistributive effect. In this important book, Serena Natile confrontsthe limits of mobile money and the entrepreneurial economic model underpinning it." - Ambreena Manji, Professor of Land Law and Development at Cardiff Law School, Co-Director of the Law and Global Justice Centre, President of the African Studies Association UK and former Director of the British Institute in Eastern Africa (2010-2014).

"A carefully argued in-depth study of the limits of what was achieved by Vodafone’s M-Pesa mobile phone banking initiative in Kenya. Focusing on how and how far it led to more women being included in the economy, The Exclusionary Politics of Digital Financial Inclusion shows how this form of private-public partnership privileges neo-liberal values and reinforces existing inequalities and social practices. A must read for those working in fields as varied as law and development, gender studies, financial regulation, sociology of law and transnational law." - David Nelken is Professor of Comparative and Transnational Law in the Dickson Poon School of Law, King's College London.

"This volume examines one of the most iconic cases of digital financial inclusion in development - Kenya’s M-Pesa programme. Natile’s book brings together feminist political economy with socio-legal studies to provide a comprehensive view of the institutional landscape in Kenya and place this case study in global context. Her exploration is grounded in empirical research that centres the views of women who use M-Pesa as part of their livelihood strategies whilst juggling the multiple pressures of income generation, care and reproductive and community labour. The acute analysis unravels the nexus of financial inclusion and gender equality, and how the ‘logic of opportunity’ can disguise gendered burdens of labour which allow banks to profit from women’s solidarity and survival practices on an often overstated promise of autonomy and success." - Professor Kate Maclean, Centre for International Development, University of Northumbria, UK.

Financial Inclusion and Its Digital Turn: A Gendered Story?

Chapter 1: A Brief Herstory Of Gender, Development And Financial Inclusion

The International Development Project: An Overview

The Colonial Legacy of Financial Exclusion

From Microcredit to Financial Inclusion

Gender, Development and The Rhetoric of Inclusion

Chapter 3: The Story Of M-Pesa In Kenya: A Gender Reading

Chapter 4: The Gendered Narratives of Mobile Money: From Social Entrepreneurship to Philanthrocapitalism

Chapter 5: The Gendered Governance of Mobile Money: From Local to Global and Back

Regulating Mobile Money: From Kenya To Global and Back