The Expansion of Orthodox Europe
Byzantium, the Balkans and Russia 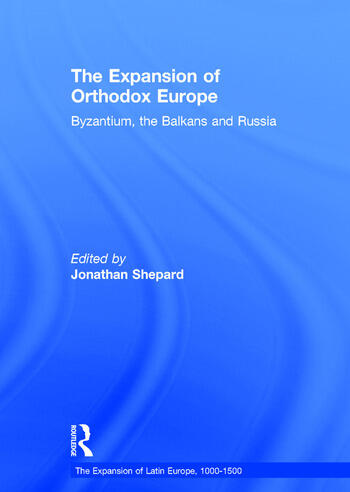 The Expansion of Orthodox Europe: Byzantium, the Balkans and Russia

This volume aims to clarify the context for the expansion of Western Europe by focusing on what had been the greatest power in early medieval Europe, the Byzantine empire, and on the continuing strengths and expansion of the Orthodox world. Byzantine 'orthodoxy' offered a format for faith, hope and fear in various combinations, involving religious beliefs and an idealised world-order. Its multifaceted nature helps explain Byzantium's success - the resilience of the earthly empire and the appeal of its religious organisation and rites to other societies. The volume reprints a set of key studies, combining classic treatments of Byzantine and Slavic history with far-reaching explorations of the extent of those worlds. Part I focuses on the empire in its heyday: some studies illustrate the sense of manifest destiny bolstering the imperial order until - and even beyond - Constantinople's fall to the fourth crusaders in 1204. The spread of the Byzantines' cult enlarged their trading zone northwards across Rus, while Byzantine-based merchants were more active than is generally realised in the Eastern Mediterranean. Part II includes an overview of the 'fragmentation' following 1204. Studies show how Byzantine rites and ideals of rulership were adopted by Serb and Bulgarian dynasts. Particular attention is paid to Rus: although subjugated by the Mongols, Rus churchmen, monks and leading princes all drew on Byzantine religious texts and imagery. From the later fifteenth century Moscow's rulers began to be portrayed as new guardians of religious correctness, even as the World's End supposedly drew nigh. The Introduction contextualises the studies included here, highlighting the significance (and not just in terms of rivalry) of the Byzantine Orthodox world for developments in Western Europe.

Contents: Introduction; Part 1 The Buoyancy of Byzantium Before 1204: Its Manifest Destiny and Many Frontiers: God and the 'family of princes' presided over by the Byzantine emperor, André Grabar; The strength of empire and capital as seen through Byzantine eyes, Paul J. Alexander; The history of the future and its uses: prophecy, policy and propaganda (with postscript), Paul Magdalino; Emperors and expansionism: from Rome to Middle Byzantium, Jonathan Shepard; Isaac II, Saladin and Venice, Paul Magdalino; Byzantine trade with Egypt from the mid-10th century to the 4th Crusade, David Jacoby; Prayer, illumination and good times: the export of Byzantine wine and oil to the north of Russia in pre-Mongol times, Thomas S. Noonan and Roman K. Kovalev; 'Wine and oil for all the Rus!' the importation of Byzantine wine and olive oil to Kievan Rus, Thomas S. Noonan and Roman K. Kovalev; The many frontiers of the pre-Mongol Rus, David B. Miller; Mission impossible: ups and downs in Byzantine missionary activity from the 11th to the 15th century, Sergey A. Ivanov; The '2nd Bulgarian Empire': its origin and history to 1204, Robert L. Wolff. Part II After the Fall: Shifting Centres of the Orthodox World: Fragmentation (1204-1453) (with bibliography), Stephen W. Reinert; Some observations on the administrative terminology of the 2nd Bulgarian Empire (13th-14th centuries), Ivan Biliarsky; Tsar Stephen DuÅ¡an and Mount Athos, George C. Soulis; Between kingdom and empire: DuÅ¡an's state 1346-1355 reconsidered, Sima M. Cirkovic; Divine wisdom as part of Byzantine imperial ideology: research into the artistic interpretations of the theme in medieval Serbia. Narthex programme of Lesnovo and Sopocani, Zaga Gavrilovic; Khan or basileus: an aspect of Russian medieval political theory, Michael Cherniavsky; 'Know thy enemy': medieval Russian familiarity with the Mongols of the Golden Horde, Charles J. Halperin; Under pressure from the pagans? - the Mongols and the Russian Church, Se

Jonathan Shepard is a British historian specializing in early medieval Russia, the Caucasus, and the Byzantine Empire. Formerly University Lecturer in Russian History at the University of Cambridge, he is regarded as a leading authority in Byzantine studies and on the Kievan Rus.