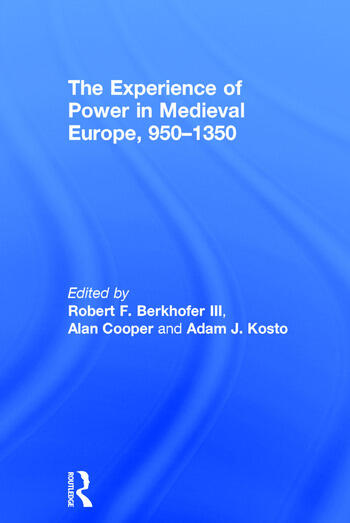 Taking their inspiration from the work of Thomas N. Bisson, to whom the book is dedicated, the contributors to this volume explore the experience of power in medieval Europe: the experience of those who held power, those who helped them wield it, and those who felt its effects. The seventeen essays in the collection, which range geographically from England in the north to Castile in the south, and chronologically from the tenth century to the fourteenth, address a series of specific topics in institutional, social, religious, cultural, and intellectual history. Taken together, they present three distinct ways of discussing power in a medieval historical context: uses of power, relations of power, and discourses of power. The collection thus examines not only the operational and social aspects of power, but also power as a contested category within the medieval world. The Experience of Power suggests new and fruitful ways of understanding and studying power in the Middle Ages.

'The theme of the book provides a provocative means to consider medieval topics with fresh techniques and insights.' Church History ’... without a single weak link, the essays here testify to Bisson's influence over an entire generation of scholars, extending his work on Spain, lordship, power and representation in new and often fascinating directions.’ English Historical Review