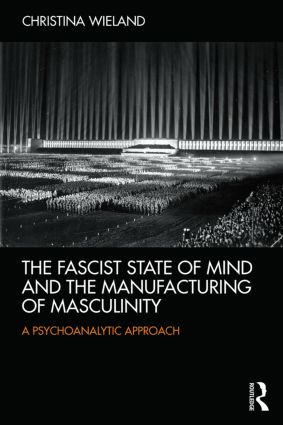 The Fascist State of Mind and the Manufacturing of Masculinity

The Fascist State of Mind and the Manufacturing of Masculinity: A psychoanalytic approach attempts to describe in psychoanalytic terms the psychological consequences of massive social trauma and national humiliation, and the regression that takes place within the individual under these circumstances. The book is not about understanding fascism as a historical, political or sociological phenomenon, but about understanding the special relationship between masculinity and fascism and the state of mind which both shaped, and was shaped by, the historical phenomenon of fascism.

Christina Wieland explores fascism as a product of certain forms of masculinity and focuses on the dynamics of masculinity as a mode of psychic functioning. She examines in detail masculine anxieties and defences and their interaction with stresses of modernity and with the social and political unrest that followed World War One.

The Fascist State of Mind and the Manufacturing of Masculinity

is divided into four parts:

Part Two – Masculinity, its meaning and its vulnerability

Part Three – Group and group theory, and the total environment

Part Four – Exploring the links between masculinity, groups and fascism

"This is a hugely interesting and provocative book that draws effectively on biographical, historical and clinical sources to make a convincing case on the intricate relationship between fascism and masculinity. Building on her previous work on masculinity and on her knowledge of psychopathology from her clinical work, Christina Wieland shows how the fascist state of mind exemplifies a particular solution to the male struggle to avoid being overwhelmed by a phantastic maternal presence that threatens masculinity in times of personal and societal trauma. Hitler’s personality and writings are used as examples of this state of mind in an attempt to understand why Hitler was the person in the right place at the right time, how he was just the sufficient mixture of charisma and craziness to overthrow common sense and tip a nation into societal and genocidal madness." - Bob Hinshelwood, Professor in the Centre for Psychoanalytic Studies, University of Essex.

"This is a valuable exploration of the madness at the heart of fascism. It employs psychoanalytic theory to generate new insights into the states of mind underlying totalitarian violence. It shows how a desperate pseudo-masculinity uses hatred and murder to stave off the collapse of selfhood, and adds to the foundations for a psychosocial understanding of contemporary extremisms." – Barry Richards, Professor of Public Communication, The Media School, Bournemouth University.

"Dr Wieland has proposed a wholly new understanding of the fascist mind, by posing the problem of what made a fascist group, with its combination of merging into nationalism, normally thought of as feminine, and heroic militarism, normally thought of as masculine. Together, they fed an illusion of rebirth through war as a rebirth of masculinity from a masculine womb. The psychoanalytic study of fascism, which goes back to the fascist period, enters a new stage with her book."- Karl Figlio, Professor in the Centre for Psychoanalytic Studies, University of Essex, and a Senior Member of the British Psychotherapy Foundation.

Christina Wieland is a psychoanalytic psychotherapist in private practice, a training therapist, teacher and supervisor. She is a visiting Fellow and teaches at the Centre for Psychoanalytic Studies at the University of Essex.