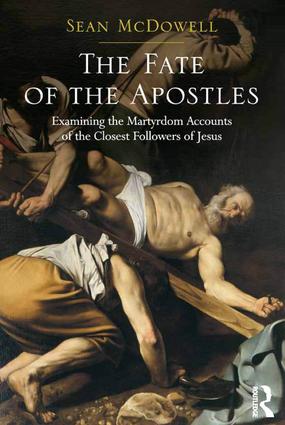 The Fate of the Apostles

Examining the Martyrdom Accounts of the Closest Followers of Jesus, 1st Edition

The Book of Martyrs by John Foxe written in the 16th century has long been the go-to source for studying the lives and martyrdom of the apostles. Whilst other scholars have written individual treatments on the more prominent apostles such as Peter, Paul, John, and James, there is little published information on the other apostles. In The Fate of the Apostles, Sean McDowell offers a comprehensive, reasoned, historical analysis of the fate of the twelve disciples of Jesus along with the apostles Paul, and James. McDowell assesses the evidence for each apostle’s martyrdom as well as determining its significance to the reliability of their testimony. The question of the fate of the apostles also gets to the heart of the reliability of the kerygma: did the apostles really believe Jesus appeared to them after his death, or did they fabricate the entire story? How reliable are the resurrection accounts? The willingness of the apostles to die for their faith is a popular argument in resurrection studies and McDowell offers insightful scholarly analysis of this argument to break new ground within the spheres of New Testament studies, Church History, and apologetics.

’Jesus forewarned his disciples of the persecution they would face. So, it’s not surprising to find stories of their martyrdom peppered throughout Church history. Many of these stories are late and unbelievable, at least in their entirety. So, what can we know about the fates of the apostles? As far as I’m aware, there has never been a thorough and careful historical investigation that provides an answer to this important question - until now… [A] welcome volume for scholars and laypeople alike. This book is an enjoyable read and provides a wealth of knowledge.’ Michael Licona, Houston Baptist University, USA ’A much needed correction to excesses on both sides of the debate: those who uncritically pass on pious legends about early Christian suffering and martyrdom and those who adopt radical revisionist approaches to history and sources and deny or relativize the evidence, in order to claim that martyrdom and persecution were not widespread in the Roman Empire or were not significantly different from the martyrdoms experienced by other people. Readers of Professor McDowell’s book will appreciate his careful method and exacting use of historical sources, as well as his balanced and fair assessment of both ancient evidence and modern scholarly discussion. His conclusion that several of Jesus’ original followers suffered martyrdom because of their belief in Jesus, based on their first-hand experience of his resurrection, is wholly persuasive.’ Craig A. Evans, Acadia Divinity College, USA ’While the New Testament tells us frustratingly little about what happened to the apostles, later traditions abound. The value of McDowell's book lies in the fact that he not only collects these traditions from a wide range of literature and localities, but also assesses them critically with the use of a scale of degrees of historical probability. This makes his assessments more nuanced and discriminating than is often the case in judgments of historicity. In part

Sean McDowell is an assistant professor of Christian Apologetics at Biola University. He has two Masters Degrees in Theology and Philosophy from Talbot Theological Seminary and earned his Ph.D. in Apologetics and Worldview Studies from Southern Baptist Theological Seminary. He is an internationally recognized speaker, best-selling author, and was 'Educator of the Year' for his hometown, San Juan Capistrano, in 2008.