The Filmmaker's Eye
Learning (and Breaking) the Rules of Cinematic Composition 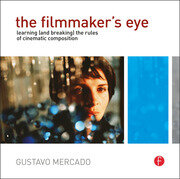 The Filmmaker's Eye: Learning (and Breaking) the Rules of Cinematic Composition

This is the only book that combines conceptual and practical instruction on creating polished and eloquent images for film and video with the technical know-how to achieve them.

Loaded with hundreds of full-color examples, The Filmmaker's Eye is a focused, easy-to-reference guide that shows you how to become a strong visual storyteller through smart, effective choices for your shots. This book has struck a chord worldwide and is being translated into several languages

After a short introduction to basic principles, a variety of shots are deconstructed in the following format:

- Why It Works: an introduction to a particular type of shot
- How It Works: callouts point out exactly how the shot works the way it does--the visual rules and technical aspects in action
- Technical Considerations: the equipment and techniques needed to get the shot.
- Breaking the Rules: examples where the "rules" are brilliant subverted

"Gustavo Mercado's beautiful book reveals the inner workings of the basic shots that create the cinematic experience. He reveals how visuals communicate to an audience. If you're a novice filmmaker or a seasoned professional, this book will broaden your visual horizons." -Bruce Block, film producer, author of The Visual Story, and visual consultant whose credits include The Holiday, Something's Gotta Give, Stuart Little, and Pretty in Pink

"Mercado's book is a great resource for aspiring cinematographers. Using a brilliant selection of images, both classic and contemporary, he eloquently analyzes the conception and execution of a shot. Most important, he manages to explain how to achieve an aesthetically beautiful image, while giving equal weight to the powerful role of cinematography in portraying the characters and telling the story." - Florian Ballhaus, cinematographer whose credits include The Devil Wears Prada, Marley and Me, Flightplan

"From understanding shot types and how and why they work to visual rules, technical considerations, and when to break the rules, this packs in practical considerations that will prove key to any filmmaking collection." - Bookwatch

"While Mercado's book is perhaps more for people who are serious about filmmaking, it has helped me understand the importance of knowing all the different angles from which one might possibly frame the exact same moment of the story, and how to decide on the one that most perfectly aids the story." - Christianity Today

"This is one of those rare filmmaking books that delivers more than its title promises. The Filmmaker’s Eye is about a lot more than just ‘the rules of composition’: it’s a beautifully illustrated, systematic guide to the visual language of film." - Learn About Film (www.learnaboutfilm.com)