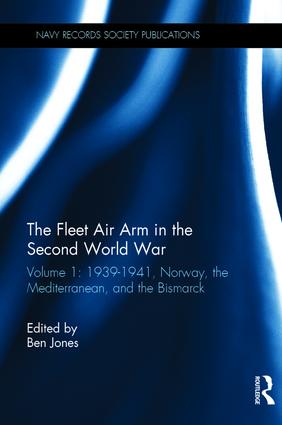 The Fleet Air Arm in the Second World War

This is the first of three volumes detailing the history of the Fleet Air Arm, the Royal Navy's aircraft carriers and naval air squadrons, during the Second World War. It deals with the formative period between 1939 and 1941 when the Fleet Air Arm tried to recover from the impact of dual control and economic stringencies during the inter-war period while conducting a wide range of operations. There is in depth coverage of significant operations including the Norwegian campaign, Mediterrranean actions such as the attack on the Italian Fleet at Taranto and the Battle of Cape Matapan, and the torpedo attacks on the German battleship Bismarck. Incidents involving the loss of and damage to aircraft carriers, including the sinking of Ark Royal, one of the most famous ships in the early years of World War Two, are also reported. Of major importance are key planning and policy issues. These include the requirements for aircraft carriers, the evolving debate regarding the necessary types of aircraft and attempts to provide sufficient facilities ashore for naval air squadrons. A wide range of official documents are used to enable the reader to appreciate the complexity of the operations and other issues which faced the Fleet Air Arm. This volume will appeal to everyone interested in how the Royal Navy adapted to the use of air power in the Second World War. Its reports bring actions vividly to life. Its correspondence demonstrates the fundamental foundation of planning, policy and logistics. In common with succeeding volumes on the Fleet Air Arm, this volume provides a new and vital perspective on how Britain fought the Second World War.

'A very much recommended volume.' The Northern Mariner