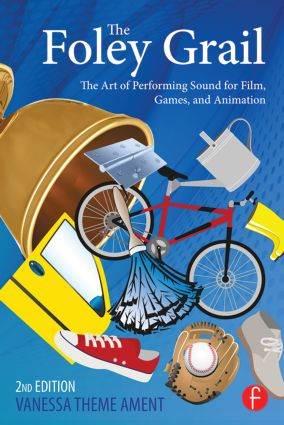 The Art of Performing Sound for Film, Games, and Animation, 2nd Edition

Master classic and cutting-edge Foley techniques that will allow you to create rich, convincing sound for any medium, be it film, television, radio, podcasts, animation, or games.

In The Foley Grail, Second Edition award-winning Foley artist Vanessa Theme Ament teaches you how Foley is designed, crafted, and edited for any project, right down to the nuts and bolts of spotting, cueing, and performing sounds. Various renowned sound artists provide a treasure trove of shortcuts, hot tips, and other tricks of the trade.

"Ever wonder how Foley sound effects are added to films and what props you need to set up a Foley stage? Curious about how sound effects are edited, how Foley artists select their shoes, or how the sounds for video games differ from those of motion pictures? You will find the answers to all these questions and more in The Foley Grail, Second Edition, Vanessa Theme Ament’s savvy but eminently readable book. No one interested in film sound can afford to be without it." -- Rick Altman, Emeritus Professor, University of Iowa; Author, Silent Film Sound and A Theory of Narrative

"This book is entertaining, informative and an absolute must-read for everyone who wants to make a career in sound, as well as being a very handy lesson for anyone involved in production on whatever level – and a particularly valuable aid for 'media' course tutors." -- Wendy Laybourn, Network Nine News

"Thanks to this publication, sound is appraised as a subjective art form. So whether you’re a novice (i.e. “what even is Foley?”) or a whizz (“pfft, why do I need to read about Jack?”), there truly is much to learn from this book. Seek the Foley Grail." - Matt Howsam, Raindance.org

"Comprising a virtual master class on leading-edge Foley techniques, The Foley Grail covers just about everything a practitioner or observer of the Foley process would need to create convinving sounds for a variety of film and television…a must-have test for any post professional's bookshelf." - Mel Lambert, CineMontage

"… By examining the entire process, from spotting Foley through the final dub, the reader of The Foley Grail gains an understanding of how this specialized art form is used to enhance the sound quality of varying genres of film, television, animation, and games. Ament views Foley as a true art which should be approached with an open mind, explaining, 'Art has no rules —only guidelines.'" - David Jobe, Topanga

PART I What Foley Artists Do, and Why:

The Evolution of a Craft: The United States

Foley As It Is Used in the Various Genres

The Protocols, Conventions, and Heirarchy

Fire in the Hole:

The Players and Their Responsibilities

Let’s Go Ahead and Go Back:

Foley As It Lands in the Game

The Art and Craft of Foley

Walking in Their Shoes:

Hang It As A Unit:

The Knack for Sync

Where and With What?

About the Author and Illustrator

Vanessa Theme Ament is a professional Foley artist whose credits include Platoon, Clue, Predator, Die Hard, Dirty Rotten Scoundrels, Noises Off, Beauty and the Beast, and other movies in addition to a long list of television shows. Vanessa is also an accomplished singer/songerwriter, sound editor, and teacher. Currently completing a PhD at Georgia State University, her dissertation examines how the cultural geography of Hollywood, the San Francisco Bay Area, and New York has influenced the transition from analogue to digital sound.