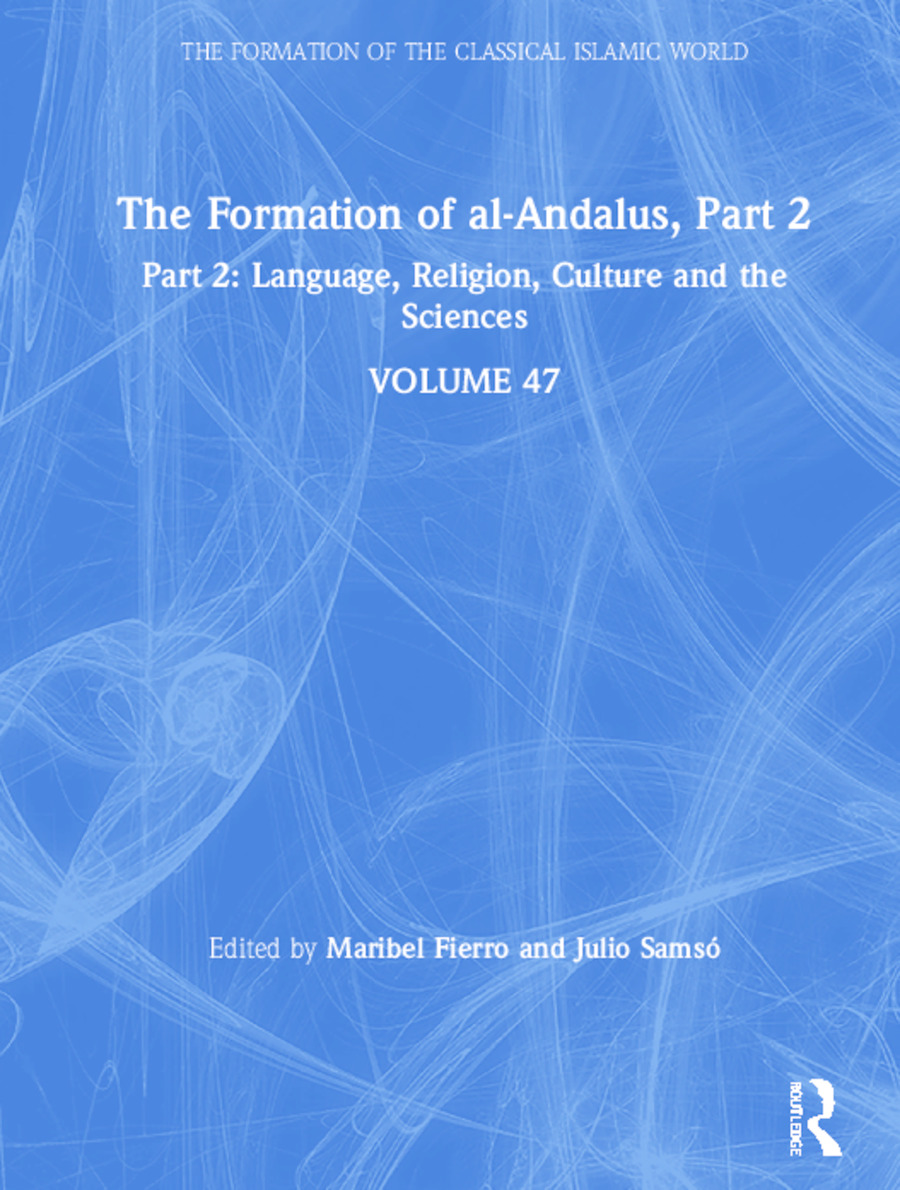 The Formation of al-Andalus, Part 2

These two volumes present a conspectus of current research on the history and culture of early medieval Spain and Portugal, from the time of the Arab conquest in 711 up to the fall of the caliphate. They trace the impact of Islamisation on the pre-existing Roman and Visigothic political and social structures, the continuing interaction between Christian and Muslim, and describe the particular development and characteristics of Muslim Spain- al-Andalus. Together, they comprise 38 articles, of which 32 have been translated into English specially for this publication. The first volume focuses on political and social history, and looks in detail at settlement patterns and urbanisation; the second examines questions of language and covers the brilliant cultural and intellectual history of the period.

'…packed with new perspectives from Spanish and other scholars on the achievements of civilization in Muslim Spain. For those interested in language, literature, theology, art, architecture, astronomy, mathematics, medicine or pharmacology, this is the place to delve.' Saudi Aramco World '… contains several hard to locate articles on language, religion, culture and the sciences during the formative period of al-Andalus. Also, […] specialists on and students of al-Andalus who are not able to read Spanish and French […] now have access to English translations of the articles.' Bibliotheca Orientalis

Contents: Introduction; Language and Religion: The language situation in al-Andalus, David Wasserstein; The end of written Ladino in al-Andalus, Roger Wright; The Christological consequences of Muslim-Christian confrontation in 8th-century Spain, Dominique Urvoy; Intellectual and Artistic Developments: The role of men of religion in the history of Muslim Spain up to the end of the Caliphate, Hussain Monés; Reflections on Malikism under the Umayyads of Spain, Hady-Roger Idris; Zuhhad of al-Andalus (300/912-420/1029), Manuela MarÃ­n; A report on the publication of previously unedited works by Ibn Masarra, Emilio Tornero; Some remarks on Fath al-Andalus, Claudio SÃ¡nchez Albornoz; Egypt and the origins of Arabic Spanish historiography: a contribution to the study of the earliest sources for the history of Islamic Spain, Mahmud ’Ali Makki; ’Abbas ibn Firnas, ElÃ­as Terés; An oriental tale in the history of al-Andalus, Fernando de la Granja; The basilica of San Vicente and the Great Mosque of CordÃ³ba: a new look at the sources, Manuel OcaÃ±a Jiménez; The Exact and Natural Sciences: ’Abd al-Malik ibn Habib’s Book on the Stars, Paul Kunitzsch; Books of Anwa’ in al-Andalus, Miquel Forcada; Indian astronomy in medieval Spain, David Pingree; The contents of Qasim ibn Mutarrif al-Qattan’s Kitab al-hay’a, Josep Casulleras; The mathematical works of Maslama of Madrid, Juan Vernet and MarÃ­a-AsuncÃ­on CatalÃ¡; The ’Meridian of Water’ in the tables of geographical coordinates of al-Andalus and North Africa, Mercè Comes; Medicine in al-Andalus until the fall of the Caliphate, Margarita Castells; Sa’id ibn ’Abd Rabbih’s Urjuza fi l-tibb, Rosa Kuhne; Ibn Juljul’s treatise of medicaments not mentioned by Dioscorides, Ildefonso Garijo; Index.