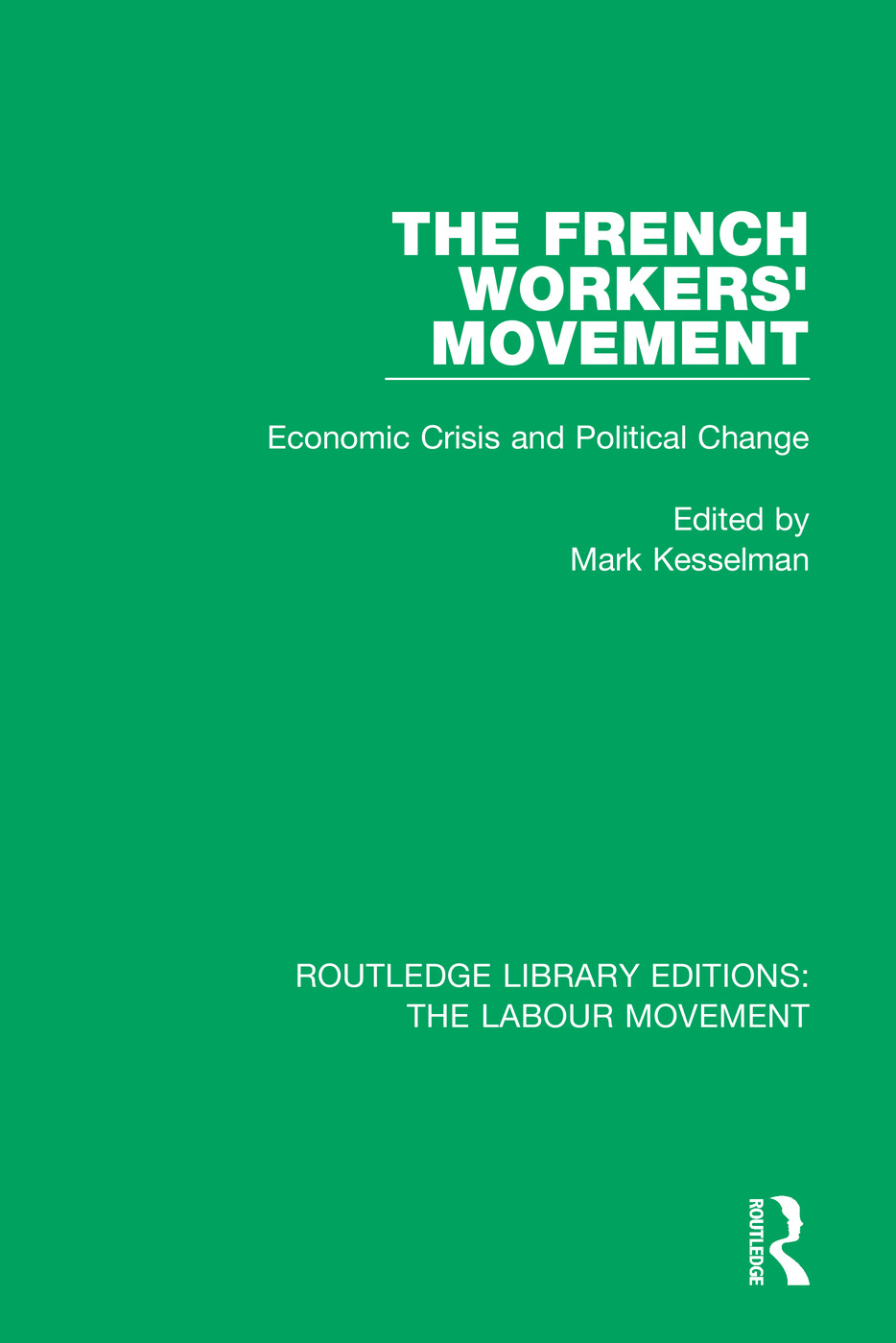 First published in 1984. This volume brings together many of the foremost French and North American specialists on the French working class movement. Although they differ substantially in their theoretical and ideological orientation, they share a left perspective. Their original essays provide a coherent and comprehensive analysis of the history of the movement, focusing on the constraints and opportunities created by the economic crisis of the 1970s and the political change ushered in by the Socialist Party’s victory in 1981.

Preface; Introduction: The French Workers’ Movement at the Crossroads Mark Kesselman; Part One: The Crisis of Capitalist Regulation and the Crisis of the Workers’ Movement; 1. Wage Labor, Capital Accumulation, and the Crisis, 1968-82 Robert Boyer 2. Labor and Capital in the Crisis: France, 1966-82 Benjamin Coriat; Part Two: The Evolution of French Trade Unions; 3. The CGT, Economic Crisis, and Political Change George Ross 4. The CFDT: From the Union of Popular Forces to the Success of Social Change René Mouriaux 5. The Trade Union Strategy of the CGT-FO Alain Bergounioux 6. The CGC and the Ambiguous Position of the Middle Strata Georges Benguigui and Dominique Montjardet; Part Three: "New Problems"; 7. The Decomposition and Recomposition of the Working Class Jean Lojkine 8. Trade Unionism and Technology Guy Groux 9. Trade Union Positions on the Organization of Production Anni Borzeix 10. The "Problem" of Women Jane Jenson 11. Trade Unions, the Environment, and the Quality of Life Michelle Durand and Yvette Harff; Part Four: Forms of Mobilization; 12. Collective Action and Union Behavior Denis Segrestin 13. The Strike in France Pierre Dubois 14. The Industrial Counterproposal as an Element of Trade Union Strategy Jean-Pierre Huiban 15. Ideology and Industrial Practice: CGT, FO, CFDT Bernard H. Moss; Part Five: The Trade Union Movement, Politics, and the State; 16. Relations between the CGT and the CFDT: Politics and Mass Mobilization Martin A. Schain 17. From Economic Crisis to Victory of the Left: Workers’ Reactions and Union Policies Jacques Kergoat 18. Trade Unions, Employers, and the State: Toward a New Relationship? Sabine Erbés-Seguin; Conclusion Mark Kesselman; Bibliography; List of Contributors; Index

This set of 44 volumes, originally published between 1924 and 1995, amalgamates a wide breadth of research on the Labour Movement, including labour union history, the early stages and development of the Labour Party, and studies on the working classes. This collection of books from some of the leading scholars in the field provides a comprehensive overview of the subject, how it has evolved over time, and will be of particular interest to students of political history.