The Future of Journalism in the Advanced Democracies 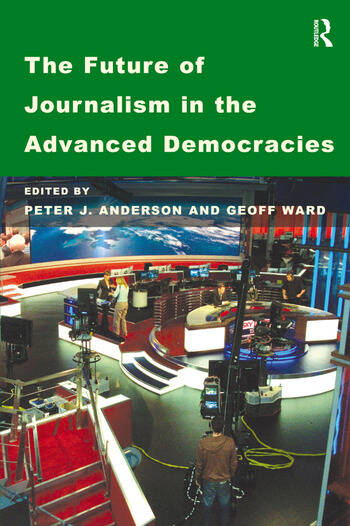 The Future of Journalism in the Advanced Democracies

What are the current problems, pressures and opportunities facing journalists in advanced democratic societies? Has there been a 'dumbing down' of the news agenda? How can serious political, economic and social news be made interesting to young people? This book explores the current challenges faced by those working in the news media, focusing especially on the responsibilities of journalism in the advanced democracies. The authors comprise experienced journalists and academics from the UK and the other countries investigated. In the opening section they investigate the key issues facing twenty-first century journalism; while in section two they offer in-depth studies of the UK news media, discussing national newspapers; regional and local newspapers, both paid for and free; terrestrial, satellite and cable television news; radio news and online journalism. These detailed analyses provide the basis for a comparison with the media of a variety of other key advanced democracies: namely the USA, France, Germany, Italy and Japan. Drawing on this evidence, the authors map out possible future developments, paying attention to their likely global impact. The book's provocative conclusions will provide the groundwork for continuing debate amongst journalists, scholars and policy-makers concerned about the place of journalism in invigorating political processes and democratic functions.

Peter J. Anderson is the Journalism Research Coordinator at one of Britain's two oldest journalism schools, at the University of Central Lancashire, UK. He has published a variety of books, articles and book chapters on both news communication and politics. He taught previously at the Universities of Lancaster and Southampton and runs a consultancy on the EU, the news media and the citizenry. Geoff Ward is currently Principal Lecturer in Journalism at the University of Central Lancashire, Uk, and is responsible for the university's international journalism programmes. He was a journalist for 25 years before joining the lecturing staff at Preston in 1992. He was a senior news sub-editor at the Daily Mail in Manchester for 12 years. He has also edited a group of weekly newspapers.

’This book poses significant and timely questions about the complex and shifting relationships between journalists and politicians in modern democracies. The answers provided by the distinguished group of contributing scholars and journalists are original, illuminating and thought provoking. This is a "must-have" book for students of journalism and comparative political communication.’ Bob Franklin, Cardiff University, UK ’At a time when the role of journalists and journalism is itself on the news agenda, when convergence, market mutation and huge developments in technology raise vital questions about the future, this study is a primer for major change...equally fascinating to anyone either already, or hoping to be, in the business and the cohort of international media watchers.’ Jim Latham, Broadcast Journalism Training Council, UK ’Offering case studies focusing on various types of journalism (radio, television, online) and in-depth examinations of journalism in democratic countries (including the US, Japan and Germany), Anderson and Ward...present compelling evidence that news journalism is losing ground to infotainment...easy to read and including plenty of pertinent case studies and examples, this book should be required reading in all college journalism courses. Highly recommended.’ Choice ’...this textbook breaks new ground...it combines journalistic clarity with academic research and it is refreshingly different in not being narrowly insular...it is a book that deserves to secure a firm niche as a widely used theory book for journalism practice courses...’ Times Higher Education Supplement 'Ward and Anderson's edited collection...functions on three levels, all of value to the student and researcher...taken together, the book presents a major new contribution to the field, and will have numerous applications for both students and their teachers...a book which functions as a good introduction to the UK media, as well as a comparat