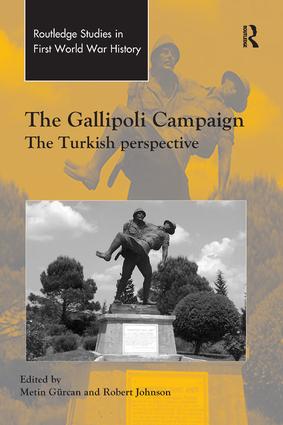 The war against the Ottomans, on Gallipoli, in Palestine and in Mesopotamia was a major enterprise for the Allies with important long-term geo-political consequences. The absence of a Turkish perspective, written in English, represents a huge gap in the historiography of the First World War. This timely collection of wide-ranging essays on the campaign, drawing on Turkish sources and written by experts in the field, addresses this gap. Scholars employ archival documents from the Turkish General Staff, diaries and letters of Turkish soldiers, Ottoman journals and newspapers published during the campaign, and recent academic literature by Turkish scholars to reveal a different perspective on the campaign, which should breathe new life into English-language historiography on this crucial series of events.

Major (Ret.) Metin Gürcan is a visiting research fellow at the Changing Character of War (CCW) programme in Oxford University and a PhD candidate at Bilkent University, Turkey, studying change in the Turkish military and the changing nature of warfare in the 21st century. Dr Robert Johnson is the Director of the Changing Character of War programme at Oxford University. He is currently finishing his book The Great War in the Middle East, to be published in 2016.