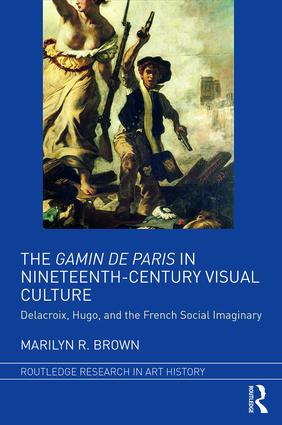 The revolutionary boy at the barricades was memorably envisioned in Eugène Delacroix’s painting Liberty Leading the People (1830) and Victor Hugo’s novel Les Misérables (1862). Over the course of the nineteenth century, images of the Paris urchin entered the collective social imaginary as cultural and psychic sites of memory, whether in avant-garde or more conventional visual culture. Visual and literary paradigms of the mythical gamin de Paris were born of recurring political revolutions (1830, 1832, 1848, 1871) and of masculine, bourgeois identity constructions that responded to continuing struggles over visions and fantasies of nationhood. With the destabilization of traditional, patriarchal family models, the diminishing of the father’s symbolic role, and the intensification of the brotherly urchin’s psychosexual relationship with the allegorical motherland, what had initially been socially marginal eventually became symbolically central in classed and gendered inventions and repeated re-inventions of "fraternity," "people," and "nation." Within a fundamentally split conception of "the people," the bohemian boy insurrectionary, an embodiment of freedom, was transformed by ongoing discourses of power and reform, of victimization and agency, into a capitalist entrepreneur, schoolboy, colonizer, and budding military defender of the fatherland. A contested figure of the city became a contradictory emblem of the nation.

"Brown’s meticulously researched illuminating study of the trajectory of the gamin across the nineteenth century makes a compelling case for the centrality of the gamin topos in French visual culture … In her perceptive critical reading of individual images Brown offers a compelling demonstration of the challenges and rewards of examining visual culture in relation to political events and the vicissitudes of history."

Ch. 5 The Gamin de Paris in Panoramic Literature and in the Revolutions of 1848

Ch. 6 The Gamin de Paris, the Second Empire, and the Commune

Ch. 7 The Gamin de Paris during the Early Third Republic

is author of Degas and the Business of Art: A Cotton Office in New Orleans (CAA Monograph, 1994) and editor of, and contributor to, Picturing Children: Constructions of Childhood Between Rousseau and Freud (Ashgate, 2002; Routledge 2017). She is professor of art history at the University of Colorado.

Routledge Research in Art History is our home for the latest scholarship in the field of art history. The series publishes research monographs and edited collections, covering areas including art history, theory, and visual culture. These high-level books focus on art and artists from around the world and from a multitude of time periods. By making these studies available to the worldwide academic community, the series aims to promote quality art history research.