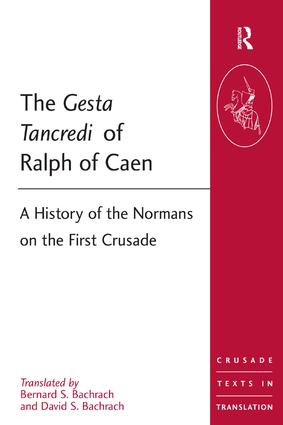 The Gesta Tancredi of Ralph of Caen

A History of the Normans on the First Crusade, 1st Edition

By Ralph of Caen

This is the first translation into English of Ralph of Caen's Gesta Tancredi. This text provides an exceptionally important narrative of the First Crusade and its immediate aftermath, covering the period 1096-1105, but is often neglected, due in no small part to the difficulties of its Latin. A native of the Norman city of Caen where he was a student of Arnulf, the future patriarch of Jerusalem, in 1107 Ralph joined Bohemond of Taranto's army as a military chaplain. After arriving in the East, Ralph took service with Bohemond's nephew Tancred, who ruled the principality of Antioch from 1108 to 1112. Although dedicated to Arnulf, the Gesta Tancredi focuses on the careers of Bohemond and, especially, of Tancred. It is one of the most important sources - indeed the most important Latin source - for the Norman campaigns in Cilicia (1097-1108), and for the early Norman rule of Antioch. The work as a whole has a striking Norman point of view and contains details found in no other source, providing a corrective to the strong northern focus of most of the other narrative sources for the First Crusade.

'University teachers and students will welcome this translation.' Military History '[The] text reads well, any difficulties are clearly signalled, and historians of the crusades as well as students of the medieval biographical genre will find this book a valuable resource.' Medium Aevum 'The translation is a lively piece of writing, as befits the vigour of the original language… The introduction is informative and astute, and […] the volume will serve its purpose of making Ralph's Gesta Tancredi accessible to a wider number of students very well.' Medieval Review ’The appearance of the Gesta Tancredi in English translation is very welcome… The translators have earned our gratitude for providing access to this wealth of material.’ Crusades ’…traduction irréprochable… Elle rendra de nombreux services aux historiens…’ Le Moyen Ã‚ge

Contents: Introduction: Our knowledge of Ralph, Ralph as a historian, Ralph's subject matter, Ralph as an independent source, Ralph as a Norman historian, Principles of translation; The Gesta Tancredi; Bibliography; Index.