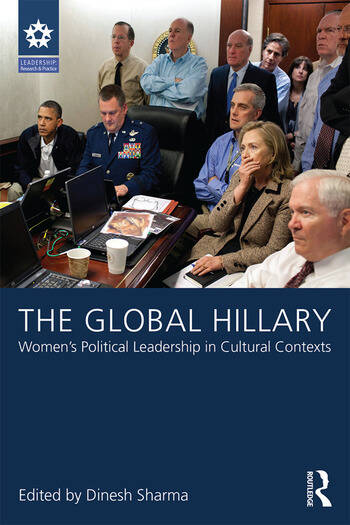 Is there a linkage between "smart power" and Hillary Clinton's leadership style? Can she advance American leadership and women's development worldwide? The Global Hillary addresses these questions and many others.

Bringing together two key aspects of Clinton’s ongoing career—her advocacy for international women’s rights and the mission to foster democratic development around the world—The Global Hillary critically analyzes Clinton’s role as a transformative leader of global influence. Essays in this collection provide insight into Clinton’s leadership style, particularly her use of American "smart power" in foreign policy, while examining her impact on the continuing worldwide struggle for women’s rights. Using international perspectives on the historical and cultural contexts of Clinton’s leadership, this book also looks toward the future of women’s political leadership in the 21st century with special attention to the prospect of electing a woman to the United States presidency.

1. The Global Hillary: Smart Power and the Rise of a Woman President  Dinesh Sharma

5. Hilary Rodham Clinton and the 1995 Beijing International Conference on Women: Gender and the Nexus of Global and Domestic Power Dynamics  N'Dri Thérèse Assié-Lumumba

11. A Translation of Her Own: Hillary, Japan, and the Pivot to Asia Eijun Senaha

Dinesh Sharma is an Associate Research Professor at the Institute for Global Cultural Studies, SUNY Binghamton. His current teaching work is focused on human rights, globalization, leadership and the UN. In addition, Sharma teaches about global leadership and the UN at Fordham University at Lincoln Center, and has authored and edited several books, including The Global Obama and Barack Obama in Hawai’i and Indonesia.

'A rare collection of insights into Hillary Clinton’s leadership style, The Global Hillary examines one of the most influential women of our time and her historic role as a champion for women’s rights and gender equality worldwide.'  —Alyse Nelson, President & CEO, Vital Voices Global Partnership

'After publishing a couple of very timely, seminal books about President Obama, Professor Sharma again proves to have his finger on the political pulse with this insightful collection of revealing essays about Secretary Clinton, arriving just as she stands poised to make history of her own.'  —Kam Williams, Baret News Syndicate

'This book is exactly what every voter needs to make an informed and intelligent decision in the 2016 Presidential election.'  —Robert A. LeVine, PhD, Roy E. Larsen Professor of Education and Human Development, Emeritus, Harvard University

'A sober, insightful look at what makes Hillary Clinton truly global.' — Kim Ghattas, author of NYT best seller The Secretary: A Journey with Hillary Clinton from Beirut to the Heart of American Power

'A must-read book that examines Hillary Clinton's impact on women's rights and human rights globally from her landmark Beijing speech 20 years ago to the potential impact as the first woman president of the most powerful democracy in the world.'  —Subha V. Barry, General Manager and Vice President, Working Mother Media

'Hillary Rodham Clinton has been a global thought leader throughout the past-quarter century in many roles—a high-profile First Lady, elected U.S. Senator, and activist Secretary of State.  Yet why is she such a complex figure arousing mixed emotions? In The Global Hillary, Sharma and his colleagues could not be more timely in offering a better understanding of this complex American leader.'  —Harold Takooshian, PhD, Professor of Psychology, Fordham University; Former President, Division of International Psychology, American Psychological Association

'The Global Hillary presents a multifaceted assessment of Hillary Clinton as an international leader and defender of the rights of women and children. It is indispensable reading for all those who want to understand her powerful impact on global society.'   —Uwe P. Gielen, Founder and Director, Institute for International and Cross-Cultural Psychology, St. Francis College

'If you want depth of coverage, no matter what your own political bent, and you want to learn what Hillary Clinton has done for women and girls, how she has pushed economic development, and the impact she has made globally, Sharma's book The Global Hillary provides the answers.  Journalist, academic and a Harvard trained psychologist, Sharma combines theory of leadership, political science and social psychology. He has woven a textured picture of Hillary Clinton that makes her a humanist and a politician. Biographical chapters compare Hillary Clinton with Eleanor Roosevelt, her feminist role model, and Sarah Palin, her polar opposite.  Sharma has brought together exciting writers to present history and the leadership style of Hillary Clinton in different parts of the world, such as Europe, China, Japan, Afghanistan, Africa and the Middle East.  Intelligent readers and policy wonks will find this book an important and resourceful guide.'  —Dr. Leonard Davidman, PhD, Past-President, New York State Psychological Association; President, New York City Psychologists; Assistant Professor of Psychiatry and Behavioral Sciences, New York Medical College

"In The Global Hillary: Women’s Political Leadership in Cultural Contexts, Sharma presents a collection of essays by leaders in the field of political science and history to place Clinton as a nexus for political development, democracy, and "national security feminism." -Angela Fritz, PhD, Head of Archives at University of Notre Dame