The Globalization of American Infrastructure
The Shipping Container and Freight Transportation 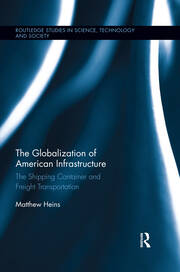 The Globalization of American Infrastructure: The Shipping Container and Freight Transportation

This book gives an account of how the U.S. freight transportation system has been impacted and “globalized,” since the 1950s, by the presence of the shipping container. A globally standardized object, the container carries cargo moving in international trade, and it utilizes and fits within the existing transportation infrastructures of shipping, trucking and railroads. In this way it binds them together into a nearly seamless worldwide logistics network. This process occurs not only in ocean shipping and at ports, but also deep within national territories. In its dependence on existing infrastructural systems, though, the network of container movement as it pervades domestic space is shaped by the history and geography of the nation-state. This global network is not invariably imposed in a top-down manner—to a large degree, it is cobbled together out of national, regional and local systems. Heins describes this in the American context, examining the freight transportation infrastructures of railroads, trucking and inland waterways, and also the terminals where containers are transferred between train and truck. The book provides a detailed historical narrative, and is also theoretically informed by the contemporary literature on infrastructure and globalization.

1. Introduction  2. The Rise of the Shipping Container  3. Containerization as Infrastructure  4. Globalizing the Infrastructure of the Nation-State  5. The Reluctant Railroads  6. Trucking Gets On Board  7. The Changing Railroads  8. Trucking Finds Its Place  9. Sites of Transfer  10. Slow Going on the Inland Waterways  11. Conclusion

Matthew Heins is an independent scholar, and works in urban planning. He gained his PhD degree from the University of Michigan, and has been a faculty member at Rhode Island School of Design, Northeastern University and Wayne State University.

"Throughout, Heins’s goal is to unpack how freight shipping is a product of the multilayered political, social, and economic contexts through which goods move. Shipping does not run over territories, but through them in mutually affecting ways. In doing so, the author usefully displaces the focus on the shipping container as a singular technological invention, instead placing it within the systems that make it possible. The book succeeds in highlighting the continuities between precontainerization and widespread adoption, as opposed to reproducing a narrative of radical departure […] This book joins the ranks of critical accounts of logistics production, disrupting the narrative of smooth, seamless flows that are rooted in technical precision. It will be of interest to those who seek nuanced accounts of the change wrought by globalization. Heins pushes back against accounts of globalization in which so-called progress comes inevitably to local and national scales by other macro forces and instead unpacks the complex, multiscalar dimensions of power and agency… He shows that infrastructure change is path-dependent and that the ways that globalization touches down in particular places are shaped by dynamic and sometimes unforeseen political, economic, and social histories."

"…a highly readable and informative history […] This is a timely book which opens an important window for historians of transport and mobility. Given containerisation’s impact internationally, historians should be encouraged to use Heins’s notions to explore and extend these and similar arguments in the contexts of other nation states, as well as political and trading groupings of states."

"…this is a useful and informative addition to the literature, which d