The Gothic Novel and the Stage
Romantic Appropriations 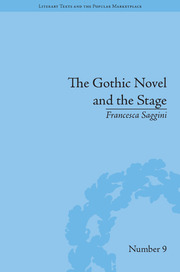 The Gothic Novel and the Stage: Romantic Appropriations

In this ground-breaking study Francesca Saggini explores the relationship between the late eighteenth-century novel and the theatre, arguing that the implicit theatricality of the Gothic novel made it an obvious source from which dramatists could take ideas. Similarly, elements of the theatre provided inspiration to novelists.

Saggini opens her study with a very useful and persuasive overview of the themes and forms of Gothic drama. In her view, stage appropriation is the textual threshold in which novelistic and dramatic/ performative texts overlap on and disseminate through each other. She examines in details the use of three specific aspects of Gothic dramatic language as recorded by both novel and drama: music, lighting, and scene design. The following chapters, informed by semiotic and narrative theory, closely examine the stage appropriations respectively in and of the Gothic novel, particularly, though not exclusively, the representation of the supernatural in Ann Radcliffe and Matthew G. Lewis. Boaden’s successful Gothic drama Fontainville Forest challenges a central aspect of Radcliffe’s poetics: her reliance on the so-called explained supernatural and puts it context by looking at contemporary stage presentations of the supernatural as offered for instance in Hamlet. The final part of the study frames Lewis’s representation of the supernatural in The Monk within the contemporary mechanics of staging and discusses the novel in relation to contemporary stage presentation and in the context of Romantic harlequinades and spectacular visual exhibits.

Saggini makes a convincing argument for a transmedial and highly cooperative reading of Gothic texts and spectacles. Her approach does not seek to displace the novel or ‘the text’ from modern perceptions of the Gothic, but wants to open the genre to plural and anti-hierarchical forms of reading and to recognise its resourcefulness in appropriating theatrical t

Acknowledgements List of Figures and Tables Introduction: The Transforming Muses: Theorizing Stage Appropriation Part One – The Gothic Stage 1. A Stage of Tears and Terror: Introducing the Gothic Stage 2. Uncloseting the Gothic Monster 3. An Overview of Critical Responses to English Gothic Theater 4. A Chronology of the Gothic Drama 5. The Gothic Drama. A Survey of Criticism Part Two – Performing Stage Appropriation in the Romantic Era: The Languages of the Stage and the Page 6. An Evening at the Theatre: Performance, Intertheatricality, Infratheatricality 7. A Pathognomic Theatre: The Body of the Actor and Contemporary Theories of Acting 8. Intersemiotic Translation and Appropriation: An Exploration of Sound, Scenery, Lighting and Costume in Gothic Dramas and Novels 9. Surface vs Depth: Staging the Signifiers of the Gothic Part Three – Practising the Appropriation of the Gothic Stage: Romantic Case Studies 10. ‘To Ears of Flesh and Blood’: Ann Radcliff e’s Stage Hauntings 11. Change, Transformation, Spectacle: The Monk and the Forms of Georgian Scenic Spectacle 12. On the Re-Mediation of Gothic Dramas: The Gothic Stage and the Gothic Trade Afterword Works Cited Notes Index

Francesca Saggini is Associate Professor of English Literature at the Università della Tuscia (Viterbo), Italy. She is the award-winning author of Backstage in the Novel: Frances Burney and the Theater Arts (Walken Cowen Memorial Prize for an outstanding work in eighteenth-century studies, 2012) and La messinscena dell’identità. Teatro e teatralità nel romanzo inglese del Settecento (Premio ‘Mario di Nola’ awarded by the Accademia Nazionale dei Lincei, 2005). Francesca’s main field of research is popular culture, in particular adaptations and afterlives. She has published essays and chapters on, among others, Inchbald, Austen, the castrati in Europe, the eighteenth-century on film, Dickens, Victorian melodrama, Stocker, Doyle, Stevenson, vampire fiction and the representation of ghosts. Recent publications include Gothic Frontiers (co-edited with Glennis Byron, 2012), Housing Fictions. The House in Writing and Culture, 1950 to the Present (co-edited with Janet Larson and Anna Enrichetta Soccio, 2012), The House of Fiction as the House of Life. Representations of the House in Literature and Culture, Richardson to Woolf (co-edited with Anna Enrichetta Soccio, 2012), two volumes on crime fiction (both co-edited with Maurizio Ascari, 2011 and 2012) and the first critical edition of Miss Tully, Narrative of a Ten Years’ Residence at Tripoli in Africa (2014). Her forthcoming book, Il gotico, is due out with Carocci in 2016. Francesca is the recipient of a Visiting Fellowship at Lucy Cavendish College (Cambridge) during which she will study Frances Burney’s tragic works.

Received honourable mention for The Society for the Study of English Book Awards 2016, Literatures in the English Language, Category A

Shortlisted for the 2017 Allan Lloyd Smith Memorial Prize for Gothic Criticism awarded by the International Gothic Association (for a standout monograph published in 2015 and 2016).

'This study focuses on the relationship between the late 18th c. and early 19th c. Gothic novel and the stage. Saggini has carried out extensive research and has detected an impressive number of sources that record stage appropriations of Gothic novels. The book is dedicated to a highly neglected Romantic genre, i.e. drama, in a manner which combines structuralist analysis with contextual historical understanding. Saggini writes lucidly in a style that will appeal to readers also outside academia, and the book contains brilliant illustrations as well as clear overviews in table form. In sum, this is a significant work of admirable scholarship, thoroughly researched and admirably documented, offering valuable insights into the eighteenth-century culture.' - The European Society for the Study of English

'Saggini's articulation is clear, and her reasoning is innovative and complex… Saggini has researched her topic deeply, and the resulting book represents a thoughtful analysis of the practices and negotiations activated by the Gothic stage.' - Emily Hodgson Anderson, University of Southern California, Review 19

'By guiding the reader through the history and development of Gothic drama in the early sections of the book, Saggini effectively sets the scene of the genre’s background, before convincingly putting forward her argument that through a cultural network of stage theatricals and novel-writing, Gothic dramas inspired Gothic novelists.” - Sarah A. Winter, Studies in Gothic