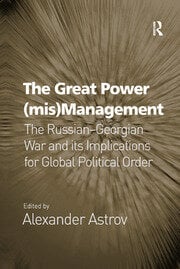 The Great Power (mis)Management: The Russian–Georgian War and its Implications for Global Political Order

Drawing on the empirical case of the Russian-Georgian war of 2008, the book explores the theoretical underpinnings of the idea of 'great power management' first articulated within the English School of International Relations. The contributors to the volume approach this idea from a variety of theoretical perspectives, ranging from policy-analysis to critical theory, but all of them are addressing the same question: What does the Russian-Georgian war of 2008 tell us about great power management as an institution of international society?

'...young Russian IR scholars are finally bursting onto the international scene, suitably flanked by assorted colleagues from elsewhere. Russian IR theory has finally arrived.' Iver B. Neumann, Norwegian Institute of International Affairs and author of Russia and the Idea of Europe 'The analysis of the Russian-Georgian war shows that the institution of great power management is undergoing historical change, so far insufficiently understood. In an often intriguing read, the book provides an important step to address that change, developing English School insights with e.g. Foucault, Schmitt, as well as identity and role theory.' Stefano Guzzini, Danish Institute for International Studies, Denmark & Uppsala University, Sweden