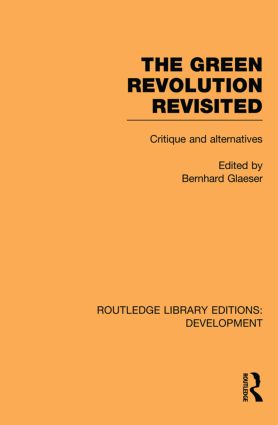 The Green Revolution – the apparently miraculous increase in cereal crop yields achieved in the 1960s – came under severe criticism in the 1970s because of its demands for optimal irrigation, intensive use of fertilisers and pesticides; its damaging impact on social structures; and its monoculture approach. The early 1980s saw a concerted approach to many of these criticisms under the auspices of Consultative Group on International Agricultural Research (CGIAR). This book, first published in 1987, analyses the recent achievements of the CGIAR and examines the Green Revolution concept in South America, Asia and Africa, from an ‘ecodevelopment’ standpoint, with particular regard to the plight of the rural poor. The work is characterised by a concern for the ecological and social dimensions of agricultural development,which puts the emphasis on culturally compatible, labour absorbing and environmentally sustainable food production which will serve the long term needs of developing countries.

1. Agriculture between the Green Revolution and ecodevelopment – which way to go? Part I: The Green Revolution: Policy and Implementation 2. The Political Economy of Agricultural Research: A Review of CGIAR’s Response to Criticism’s of the ‘Green Revoltuion’ 3. The Green Revolution Re-examined in India Part II: Alternative Approaches in Three Continents 4. Alternative Developments in Brazil 5. Trees: Appropriate Tools for Water and Soil Management 6. Low-Energy Farming Systems in Nigeria 7. Theory and Methods of Ecofarming and their Realization in Rwanda, East Africa 8. Yield Increase and Environmental Compatibility Through Ecofarming Part III: Outlook 9. Towards a Second Green Revolution?

Bernhard Glaeser is the President of the German Society for Human Ecology (DGH), LOICZ (Land-Ocean Interactions in the Coastal Zone) Corresponding Member (previously Scientific Steering Committee) and member of the IMBER (Integrated Marine Biogeochemistry and Ecosystem Research) Human Dimensions Working Group (IMBER HD). He joined the Social Science Research Center Berlin (WZB) in 1976, became Professor of Human Ecology in 1995 at Göteborg University (Sweden) and Professor of Sociology in 2001 at the Berlin Free University, Department of Political and Social Sciences. Glaeser holds degrees in economics, philosophy and sociology. He has done environmental and sustainability research in Germany, Sweden, Tanzania, China, India and Indonesia and is affiliated with various international editorial and advisory boards.

Routledge Library Editions: Development will re-issue works which address economic, political and social aspects of development. Published over more than four decades these books trace the emergence of development as one of the most important contemporary issues and one of the key areas of study for modern social science.