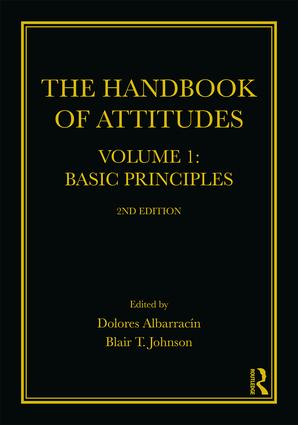 Attitudes are evaluations of people, places, things, and ideas. They help us to navigate through a complex world. They provide guidance for decisions about which products to buy, how to travel to work, or where to go on vacation. They color our perceptions of others. Carefully crafted interventions can change attitudes and behavior. Yet, attitudes, beliefs, and behavior are often formed and changed in casual social exchanges. The mere perception that other people favor something, say, rich people, may be sufficient to make another person favor it. People’s own actions also influence their attitudes, such that they adjust to be more supportive of the actions. People’s belief systems even change to align with and support their preferences, which at its extreme is a form of denial for which people lack awareness.

These two volumes provide authoritative, critical surveys of theory and research about attitudes, beliefs, persuasion, and behavior from key authors in these areas. The first volume covers theoretical notions about attitudes, the beliefs and behaviors to which they are linked, and the degree to which they are held outside of awareness. It also discusses motivational and cultural determinants of attitudes, influences of attitudes on behavior, and communication and persuasion. The second volume covers applications to measurement, behavior prediction, and interventions in the areas of cancer, HIV, substance use, diet, and exercise, as well as in politics, intergroup relations, aggression, migrations, advertising, accounting, education, and the environment.

Dolores Albarracín is Professor of Psychology and Business at the University of Illinois at Urbana-Champaign. She is a prolific, award-winning expert in the study of attitudes, communication, and behaviour.

Blair T. Johnson is Board of Trustees Distinguished Professor in the University of Connecticut’s Department of Psychological Sciences. He is an award-winning scholar in the areas of attitudes, social influence, health, and research methods.