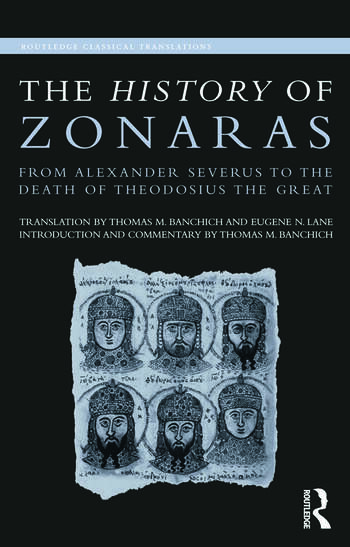 The History of Zonaras: From Alexander Severus to the Death of Theodosius the Great

While an exile from Constantinople, the twelfth-century Byzantine functionary and canonist John Zonaras culled earlier chronicles and histories to compose an account of events from creation to the reign of Alexius Comnenus. For topics where his sources are lost or appear elsewhere in more truncated form, his testimony and the identification of the texts on which he depends are of critical importance.

For his account of the first two centuries of the Principate, Zonaras employed now-lost portions of Cassius Dio. From the point where Dio’s History ended, to the reign of Theodosius the Great (d. 395), he turned to other sources to produce a uniquely full historical narrative of the critical years 235-395, making Books XII.15-XIII.19 of the Epitome central to the study of both late Roman history and late Roman and Byzantine historiography.

This key section of the Epitome, together with Zonaras’ Prologue, here appears in English for the first time, both complemented by a historical and historiographical commentary. A special feature of the latter is a first-ever English translation of a broad range of sources which illuminate Zonaras’ account and the historiographical traditions it reflects. Among the authors whose newly translated works occupy a prominent place in the commentary are George Cedrenus, George the Monk, John of Antioch, Peter the Patrician, Symeon Magister, and Theodore Scutariotes. Specialized indices facilitate the use of the translations and commentary alike.

The result is an invaluable guide and stimulus to further research for scholars and students of the history and historiography of Rome and Byzantium.