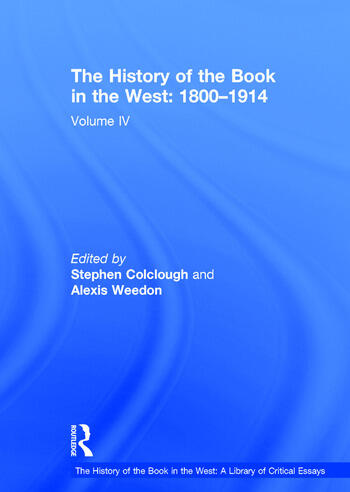 This collection of published papers on the development of the publishing cycle from author to reader includes work by many of the leading authorities on the history of the book in the nineteenth century, including James Barnes, Simon Eliot, Kate Flint, Elizabeth McHenry, Robert Patten, David Vincent and Ronald Zboray. It contains examples of different approaches, reflecting the fact that scholars come from a variety of disciplinary traditions, such as bibliography, typography, literary studies, library studies and the history of science. The introduction provides an overview of both the historical context and recent work on the subject. The volume is divided into five sections: National Publishing Structures in America, France, and Russia; International Trade; Publishing Practices; Distribution; Reading. The collection includes work in the tradition of French book history which has focussed on the systems and structures of the publishing industry and Anglo-American book history characterised by detailed analyses of the publication of a specific title or the practices of an individual reader.

Stephen Colclough is Lecturer at Bangor University, UK and Alexis Weedon is Professor and Director of the Research Institute for Media Art and Design, University of Bedfordshire, UK