The History of the Irish Famine
Fallen Leaves of Humanity: Famines in Ireland Before and After the Great Famine 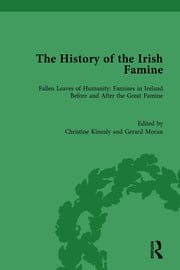 The History of the Irish Famine: Fallen Leaves of Humanity: Famines in Ireland Before and After the Great Famine

The Great Irish Famine remains one of the most lethal famines in modern world history and a watershed moment in the development of modern Ireland – socially, politically, demographically and culturally. In the space of only four years, Ireland lost twenty-five per cent of its population as a consequence of starvation, disease and large-scale emigration. Certain aspects of the Famine remain contested and controversial, for example the issue of the British government’s culpability, proselytism, and the reception of emigrants. However, recent historiographical focus on this famine has overshadowed the impact of other periods of subsistence crisis, both before 1845 and after 1852.

This volume seeks to counterbalance the recent historiographical focus on the Great Irish Famine which has overshadowed the impact of other periods of subsistence crisis, both before 1845 and after 1852. As occurred during the Great Famine, they often resulted in increased levels of evictions, emigration, disease and death, although the scale was lower. While the Great Famine brought major economic, social and demographic changes, large areas of the country retained pre-famine structures with many communities continuing to have a subsistence existence and, consequently, regular crop failures and famines. These lesser known famines are examined in this volume along with the causes and why they did not achieve the scale of the Great Famine.

Dr Gerard Moran, European School Brussels. Dr Moran is author of many books and articles on Emigratin from Ireland.