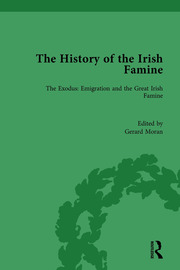 The Great Irish Famine remains one of the most lethal famines in modern world history and a watershed moment in the development of modern Ireland – socially, politically, demographically and culturally. In the space of only four years, Ireland lost twenty-five per cent of its population as a consequence of starvation, disease and large-scale emigration. Certain aspects of the Famine remain contested and controversial, for example the issue of the British government’s culpability, proselytism, and the reception of emigrants. However, recent historiographical focus on this famine has overshadowed the impact of other periods of subsistence crisis, both before 1845 and after 1852.

This volume examines how the failure of the potato crop in the late 1840s led to the mass exodus of 2.1 million people between 1845 and 1855. They left for destinations as close as Britain and as far as the United States, Canada and Australia, and heralded an era of mass migration which saw another 4.5 million leave for foreign destinations over the next half-century. How they left, how they settled in the host countries and their experiences with the local populations are as wide and varied as the numbers who left and, using extensive primary sources, this volume analyses and assesses this in the context of the emigrants themselves and in the new countries they moved.

Dr Gerard Moran, European School Brussels. Dr Moran is author of many books and articles on Emigratin from Ireland.