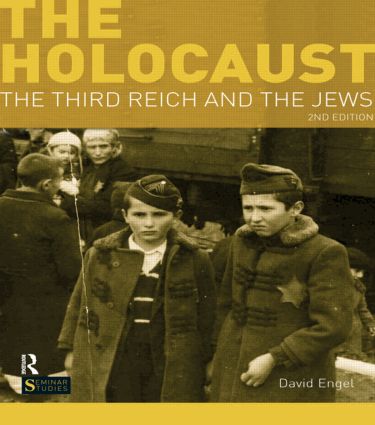 The Third Reich and the Jews, 2nd Edition

· A much expanded selection of original documents, many never before anthologised in English

· Useful and informative Chronology, Who’s Who and Glossary

David Engel’s book is a taut, compact narration that appeals to the intellect as much, if not more, than to the emotions. It is sure to be welcomed by students in departments of History, Politics and European Studies as well as by anyone trying to get to grips with this complex and far-reaching subject for the first time.

Introduction to the Series (not included)

The Jews in Christian Europe

The Jews in Hitler's World View

Jews in the Ideology and Programme of Nazism

True Believers and World War I

A Diabolical Plot of the Work of 'Only Men'?

The State of Documentation

To Leave or Not to Leave?

6 THE TRANSITION TO KILLING

The Means of Murder

Communal Responsibility and Strategies for Survival

The Unofficial Community and Resistance

Beyond the Nazi Realm

8 HUMANITY, MODERNITY, AND THE HOLOCAUST

is Greenberg Professor of Holocaust Studies, Professor of Hebrew Studies and Judaic Studies, and Professor of History at New York University. His books include In the Shadow of Auschwitz; Facing a Holocaust, and Historians of the Jews and the Holocaust.