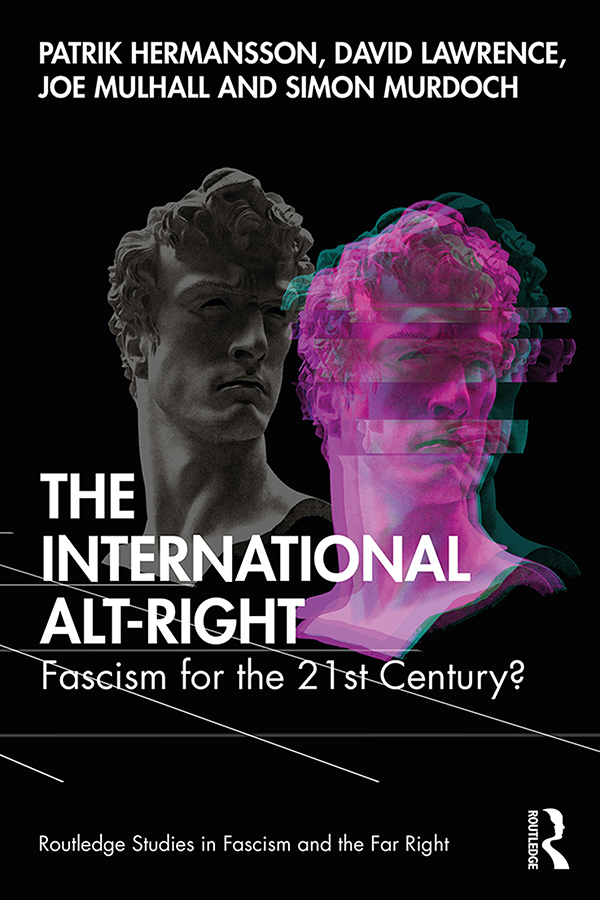 The alt-right has been the most important new far-right grouping to appear in decades. Written by researchers from the anti-racist advocacy group HOPE not hate, this book provides a thorough, ground-breaking, and accessible overview of this dangerous new phenomenon. It explains where the alt-right came from, its history so far, what it believes, how it organises and operates, and its future trajectory.

The alt-right is a genuinely transnational movement and this book is unique in offering a truly international perspective, outlining the influence of European ideas and movements as well as the alt-right's development in, and attitude towards, countries as diverse as Japan, India, and Russia. It examines the ideological tributaries that coagulated to form the alt-right, such as white supremacy, the neo-reactionary blogosphere, the European New Right, the anti-feminist manosphere, the libertarian movement, and digital hate culture exemplified by offensive memes and trolling. The authors explore the alt-right's views on gender, sexuality and masculinity, antisemitism and the Holocaust, race and IQ, globalisation and culture as well as its use of violence. The alt-right is a thoroughly modern far-right movement that uses cutting edge technology and this book reveals how they use cryptocurrencies, encryption, hacking, "meme warfare", social media, and the dark web.

This will be essential reading for scholars and activists alike with an interest in race relations, fascism, extremism, and social movements.

Politics is being upended. How can we make sense of this age of rebellion? This book is essential reading not just for those seeking to understand the contemporary far right but for modern politics and online culture more generally. — Jon Cruddas MP for Dagenham and Rainham, UK

Anyone who wants to be well-informed on rising levels of far-right extremism, populism and fascism in the Western world and beyond should read The International Alt-Right. This is a critical contribution by renowned experts on the face of fascism in the 21st century. And it is far more comprehensive than many other works about this movement, exploring areas that often receive little attention such as the manosphere or the role of this movement in Japan. I would highly advise those interested in rising extremism across the world to read this book. — Heidi Beirich, Intelligence Project Director for Southern Poverty Law Center, USA

With impressive patience, the authors guide the reader through the murky and complex world of the alt-right. In this timely and necessary analysis, they show that the alt-right, despite the new terminology of 'incels', 'cucks' or metapolitics, is firmly rooted in the ideas of fascism and the radical right, and they thus sound a warning which needs to be heard very broadly. — Dan Stone, Royal Holloway, University of London, UK

Anyone who wants to understand the truly global nature of the new far right should start right here. The International Alt-Right includes sharp observation of the movement’s current figureheads, groups and the connections between them, and at the same time digs deep into the conspiracy theories, pseudoscience and reactionary ideas that underpin their thought. The authors provide some of the clearest explorations of the identitarian and neoreactionary movements, and sections on the manosphere and links to Russia and India are both comprehensive and fascinating. This book is a hard-headed and timely look at a growing and often frightening international phenomenon. — Mike Wendling, author of 'Alt-Right: From 4chan to the White House'

In the often loosely connected and sprawling world of extreme online politics, the new work, The International Alt-Right: Fascism for the 21st Century provides a clear and detailed roadmap for understanding the many facets and manifestations of the contemporary alt-right movement. This book powerfully combines detailed research with an insightful theoretical analysis to create an interdisciplinary and intersectional discussion of these pressing political activities and voices. The attention to gender, race, and global issues is particularly impressive and thorough. While theoretical in nature, this work is highly accessible for many types of readers, and can serve as an invaluable resource for classroom and academic use, as well as a guide for anyone committed to understanding and resisting present-day fascism. — Christa Hodapp, University of Massachusetts Lowell, USA

Part I: Ideas and Beliefs

1. The European Roots of Alt-Right Ideology

2. A Global Anti-Globalist Movement: The Alternative Right, Globalisation and 'Globalism'

3. For Whom the Bell Curves: The Alt-Right and Pseudoscientific Racism

4. The Alternative Right, Antisemitism and the Holocaust

5. Right-Libertarianism and the Alternative Right

9. The Role of the Troll: Online Antagonistic Communities and The Alternative Right

11. Gaming the Algorithms: Exploitation of Social Media Platforms by the Alternative Right

12. From Anger to Ideology: A History of the Manosphere

13. Masculinity and Misogyny in the Alternative Right

14. Sexuality and the Alternative Right

15. Japan and the Alternative Right

16. Russia and the Alternative Right

17. Myth, Mysticism, India and the Alt-Right

Patrik Hermansson is a researcher at HOPE not hate and was responsible for the documentary, Undercover in the Alt-Right (2018).

is a researcher at HOPE not hate.

, is a historian of fascism and Senior Researcher at HOPE not hate.

is aresearcher at HOPE not hate.