The International Library of Essays on Capital Punishment, Volume 3
Policy and Governance 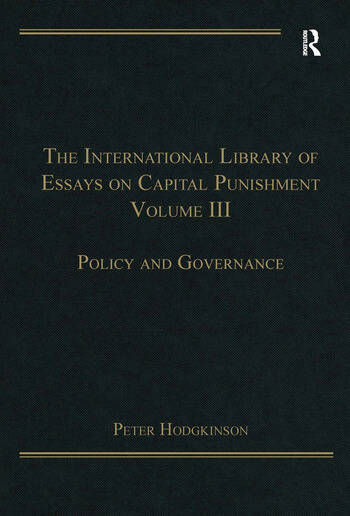 The International Library of Essays on Capital Punishment, Volume 3: Policy and Governance

This volume provides analyses of a range of subjects and issues in the death penalty debate, from medicine to the media. The essays address in particular the personal complexities of those involved, a fundamental part of the subject usually overridden by the theoretical and legal aspects of the debate. The unique personal vantage offered by this volume makes it essential reading for anyone interested in going beyond the removed theoretical understanding of the death penalty, to better comprehending its fundamental humanity. Additionally, the international range of the analysis, enabling disaggregation of country specific motivations, ensures the complexities of the death penalty are also considered from a global perspective.

Peter Hodgkinson OBE is Director of the Centre for Capital Punishment Studies and Senior Research Fellow at the University of Westminster, UK.