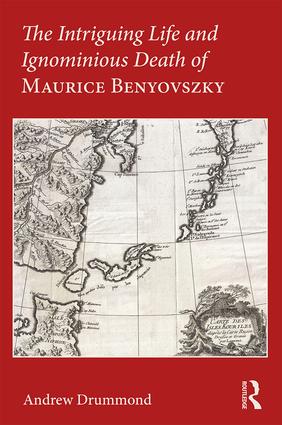 The Intriguing Life and Ignominious Death of Maurice Benyovszky

Published in 1790, Maurice Benyovszky’s posthumous memoir was an instant sensation. A tale of exploration and adventure beginning with his daring escape from a Siberian prison and ending with his coronation as King of Madagascar, it was translated into several languages and adapted for the theatre and opera. This book explores the veracity of this memoir and, more broadly, the challenges faced by the explorers of the age and the brutality of colonisation.

The self-styled Hungarian Baron Maurice Auguste Aladar Benyovszky, Counsellor to the Duke of Saxony and Colonel in the service of the Queen of Hungary, was in fact only confirmed to have been an officer in a regiment of the Polish Confederation of Bar. While he did escape from Russian captors and subsequently travel to Japan, Formosa, China and Madagascar, many of his exploits were wildly exaggerated or simply invented. Andrew Drummond reveals an alternative picture of events by looking at statements from Benyovszky’s travelling companions and sceptical officials as well as contemporary documents from the places he claimed to have visited, untangling the truth behind his stories and examining what these stories can nonetheless tell us about the era in which Benyovszky lived.

Witty and engagingly written, this book is fascinating reading for anyone interested in eighteenth-century colonial history and the story of early European and Russian explorers.

THE ISLAND OF LIQUOR

WHAT THE JAPANESE THOUGHT

Andrew Drummond is based in Edinburgh, UK. He holds a degree in Modern Languages from Aberdeen University and a post-graduate degree in German Studies from King’s College, London. His publications include An Abridged History (2004), A Hand-book of Volapük (2006), Elephantina (2008) and Novgorod the Great (2010), the first of which was short-listed for the Saltire Society’s First Book of the Year award, and he has recently had several short stories published in anthologies.