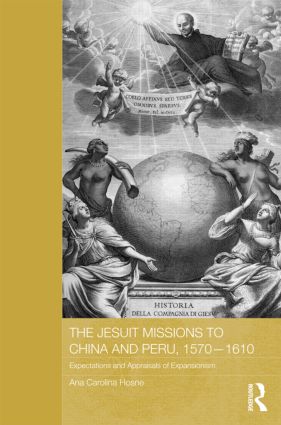 The rulers of the overseas empires summoned the Society of Jesus to evangelize their new subjects in the ‘New World’ which Spain and Portugal shared; this book is about how two different missions, in China and Peru, evolved in the early modern world. From a European perspective, this book is about the way Christianity expanded in the early modern period, craving universalism.

In China, Matteo Ricci was so impressed by the influence that the scholar-officials were able to exert on the Ming Emperor himself that he likened them to the philosopher-kings of Plato’s Republic. The Jesuits in China were in the hands of the scholar-officials, with the Emperor at the apex, who had the power to decide whether they could stay or not. Meanwhile, in Peru, the Society of Jesus was required to impose Tridentine Catholicism by Philip II, independently of Rome, a task that entailed compliance with the colonial authorities’ demands.

This book explores how leading Jesuits, Matteo Ricci (1552-1610) in China and José de Acosta (1540-1600) in Peru, envisioned mission projects and reflected them on the catechisms they both composed, with a remarkable power of endurance. It offers a reflection on how the Jesuits conceived and assessed these mission spaces, in which their keen political acumen and a certain taste for power unfolded, playing key roles in envisioning new doctrinal directions and reflecting them in their doctrinal texts.

The global perspective of this work can be measured in the array of sources, in Chinese, Italian, Spanish, Portuguese and Latin, apart from the historiographical literature in French and English a linguistic achievement that deserves to be praised… As for the methodological and historical framework, A. Hosne’s book is a precious contribution to a connected history of the Catholic missions. She eloquently proves the enormous potential of this path that undoubtedly deserves to be pursued in future works.

The author’s spirit of synthesis, which never gives in to the temptation of unnecessary displays of a clear erudition, needs to be celebrated. Thus, this book, in its effort to put in perspective the two locations under consideration, is grounded on a deep and thorough knowledge of the Andean context and the Chinese context, of Acosta’s works and Ricci’s works, and the situation of the missions when the two missionaries’ respective catechisms were published. It also proposes multiple references – always accurate and pertinent – to the secondary literature, even the most recent. The book’s numerous, and usually short, sections, allow readers to quickly find the information of their interest.

Newcomers to the subject will appreciate the care with which Hosne introduces her material. In the first three chapters, we find brief biographies of Ricci and Acosta, and introductions to the history of the Society’s missionary work in China and Peru. Hosne draws an important contrast between the strategy of “Hispanization” that characterized the Peru mission, where Spanish rule sought to “civilize” the indigenous inhabitants of the Andes as well as make Christians of them, and the strategy of “accommodation” characteristic of the mission in China, where the Jesuits tried to adapt Christian teaching for a people whose culture they had no hope of changing.

Introduction Part 1: The Men and the Missions 1. The Men 2. The Missions 3. The Tricky Concepts of Hispanicization in Peru and Accommodation in China Part 2: The Missions and their Texts Introduction 4. The Craftsmanship of Jesuit Catechisms in Peru and China 5. Christian Truths in the Andean and Chinese Settings Conclusion

Ana Carolina Hosne is a Marie Curie Fellow of the Gerda Henkel Foundation at the University of Heidelberg, Germany.