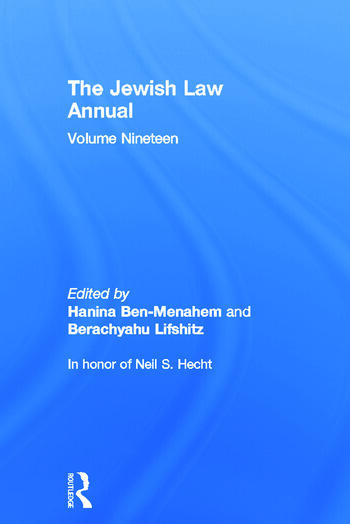 Volume 19 of The Jewish Law Annual is a festschrift in honor of Professor Neil S. Hecht. It contains thirteen articles, ten in English and three in Hebrew. Several articles are jurisprudential in nature, focusing on analysis of halakhic institutions and concepts. Elisha Ancselovits discusses the concept of the prosbul, asking whether it is correct to construe it as a legal fiction, as several scholars have asserted. He takes issue with this characterization of the prosbul, and with other scholarly readings of Tannaitic law in general. The concepts of dignity and shame are addressed in two very different articles, one by Nahum Rakover, and the other by Hanina Ben-Menahem. The former discusses halakhic sources pertaining to the dignity inherent in human existence, and the importance of nurturing it. The latter presents a fascinating survey of actual legal practices that contravened this haklakhic norm. Attestations of these practices are adduced not only from halakhic and semi-halakhic documents, but also from literary, historical, and ethnographic sources. Three articles tackle topical issues of considerable contemporary interest. Bernard S. Jackson comments on legal issues relating to the concept of conversion arising from the story of the biblical heroine Ruth, and compares that concept to the notion of conversion invoked by a recent English court decision on eligibility for admission to denominational schools. An article by Dov I. Frimer explores the much agonized-over question of halakhic remedies for the wife whose husband refuses to grant her a get (bill of divorce), precluding her remarriage. Frimer’s focus is the feasibility of inducing the husband to grant the get through monetary pressure, specifically, by awarding the chained wife compensatory tort damages. Tort remedies are also discussed in the third topical article, by Ronnie Warburg, on negligent misrepresentation by investment advisors. Two papers focus on theory of law. Shai Wozner explores the decision rules–conduct rules dichotomy in the Jewish law context, clarifying how analysis of which category a given law falls under enhances our understanding of the law’s intent. Daniel Sinclair explores the doctrine of normative transparency in the writings of Maimonides, the Hatam Sofer, and R. Abraham Isaac Kook, demonstrating that although transparency was universally endorsed as an ideal, some rabbinical authorities were willing to forego transparency where maintenance of the halakhic system itself was imperiled. An article by Alfredo M. Rabello reviews the primary and secondary literature on end-of-life issues, and contextualizes the much-discussed talmudic passage bAvoda Zara 18a. And an article by Chaim Saiman offers a critical survey of the main approaches to conceptualizing and teaching Jewish law in American universities; it also makes suggestions for new, and perhaps more illuminating pedagogic direction. In the Hebrew section, an intriguing article by Berachyahu Lifshitz presents a comparison of Persian and talmudic law on the status of promises and the role of the divine in their enforcement. Yuval Sinai discusses the halakhic law of evidence, particularly the well-known "two witnesses" requirement and departures from it. The volume closes with a historical article by Elimelech Westreich on the official rabbinical court in nineteenth century Jerusalem. It focuses on the rabbinical figures who served on the court, the communities for whom it adjudicated, and its role in the broader geopolitical and sociocultural context.

1. The Prosbul–A Legal Fiction?; 2. Shame Punishment in Jewish LegalCulture: Some Preliminary Observations; 3. Refusal to Give a Get: Tort Damages and theRecalcitrant Spouse in Contemporary Jewish Law; 4. Ruth’s Conversion: Then and Now, 5. The End of Life in Jewish Law; 6. Man as a Synthesis of Body and Spirit:A Jewish Perspectives; 7.  Framing Jewish Law for the Contemporary Law School; 8. Normative Transparency in Jewish Law:Maimonides, R. Moses Sofer and R. Abraham Isaac Kook; 9. The Tort of Negligent Misrepresentation in Investment Planning: A Comparative Analysis; 10. On Conduct Rules and Decision Rules in Jewish Law; 11. Promises in Talmudic Law and Persian Law; 12. Maimonides on the "Two Witnesses" Requirement; 13. The Official Rabbinical Court of Jerusalem (1841-1921), its Composition and Status

Berachyahu Lifshitz is Professor of Comparative law at the Hebrew University of Jerusalem's Faculty of Law.