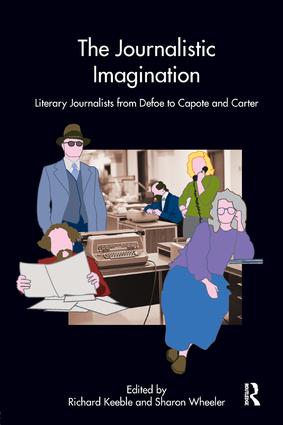 Literary Journalists from Defoe to Capote and Carter, 1st Edition

Focusing on the neglected journalism of writers more famous for their novels or plays, this new book explores the specific functions of journalism within the public sphere, and celebrate the literary qualities of journalism as a genre.

Each chapter begins with a concise biography to help contextualise the the journalist in question and includes references and suggested further reading for students. Any student or teacher of journalism or media studies will want to add this book to their reading list.

'Whether endorsing literary journalism’s canonical status or affirming its merit as a new academic discipline three centuries in the making, The Journalistic Imagination is a major coup for practitioners and scholars of literary journalism everywhere.' - John S. Bak, President, International Association for Literary Journalism Studies

'Too often, journalism is dismissed as a rather flat and functional style. The editors of this book are therefore to be congratulated for opening the door on some of the wealth and diversity of journalistic writing. Drawing on examples from Daniel Defoe to Angela Carter and from the UK, USA and beyond, this book proves that it is essential to take a historical perspective to illustrate the gestation of the range of styles which can be claimed to belong to literary journalism.' - Martin Conboy, Department of Journalism Studies, University of Sheffield, UK

'A timely and useful resource… and is relevant to a range of disciplines besides journalism including English, creative writing and media and cultural studies… clearly an important addition to this wider project - to map out an exciting new field.' - Journalism Studies

"Overall, this interesting collection adds to an ever-richer lode of literary journalism scholarship. it wil acquaint readers with British writers, especially, that they may have overlooked, as well as British academics' concerns and approaches to literary journalism studies." -American Journalism

Introduction: On Journalism, Creativity and the Imagination 1. Defoe's The Storm as a Model for Contemporary Reporting 2. William Hazlitt: Poetry, Drama, and Literary Journalism 3. The Personal is the Political: George Sand's Contribution to Popular Journalism 4. Charles Dickens and the Voices of Journalism 5. 'A Work and a Purpose': Willa Cather's Journalism 6. 'The Dangerous Third Martini': Graham Greene, Libel and Literary Journalism in 1930s Britain 7. The Lasting in the Ephemeral: Assessing George Orwell's As I Please Columns 8. An Unscathed Tourist of Wars: The Journalism of Martha Gellhorn 9. Cold-Blooded Journalism: Truman Capote and the Non-Fiction Novel 10. The Journalist as Philosopher and Cultural Critic: The Case of Angela Carter

Richard Keeble is Professor of Journalism at the University of Lincoln. His publications include The Newspapers Handbook (Fourth Edition, 2005), Ethics for Journalists (2001) and Secret State, Silent Press (1997). He is also joint editor of the academic quarterly, Ethical Space.

Sharon Wheeler is Field Chair in Print Journalism, PR and Publishing at the University of Gloucestershire. She is completing Feature Writing for Journalists (2007) and has contributed to Print Journalism (2005). Sharon is editor of http://www.reviewingtheevidence.com and is part of the blogging team at http://heydeadguy.typepad.com/heydeadguy/