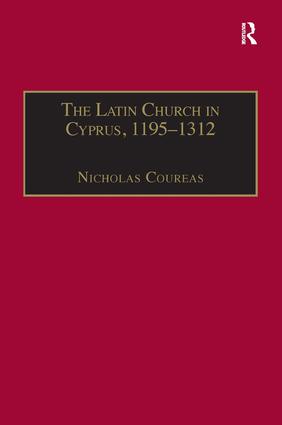 This is a study of the first century of the Latin Church on Cyprus, following the island’s loss to the Byzantine empire and its conquest by Richard the Lionheart in 1195. It covers both secular and regular clergy, and deals with the complex relations between church and crown, the nobility, and the urban Latin population within the island, as well as its relations with the papacy and the other Latin churches of the East. Not least, it analyses the troubled relations between the Latin and the Orthodox churches. An important feature of the book is the new light thrown on the links between the Church of Cyprus and the Latin patriarchs of Jerusalem and Antioch, and on the expansion of the Latin Church in the East, in the Byzantine territories conquered following the Fourth Crusade. This book is the first in-depth account of the religious history of the Latin kingdom of Cyprus which was the most durable of all the latin states established by the Crusaders in the Eastern Mediterranean.

'Coureas’s work makes an important contribution to a better understanding of the history of the Latin East.' Church History, Vol. 68, No. 1 '…a significant achievement'. Journal of Medieval History, Vol. 25, No. 1 'This book will replace the older works…as the standard work on its subject.' Journal of Ecclesiastical History, Vol. 50, No. 2 '…a solid achievement…I hope that this will be the first in a series of volumes by [Nicholas Coureas]….' Catholical Historical Review 'Coureas makes good use of recent works on the period…' Speculum '… a thoughtful work of Cypriot Frankish studies…' Byzantine and Modern Greek Studies