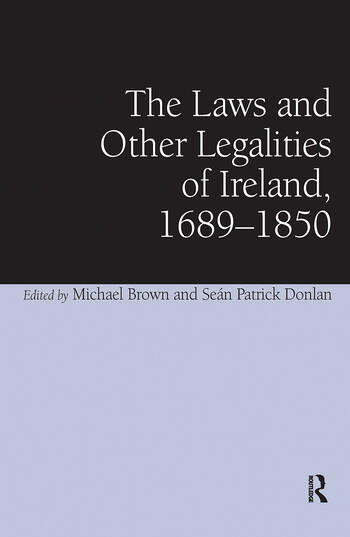 While Irish historical writing has long been in thrall to the perceived sectarian character of the legal system, this collection is the first to concentrate attention on the actual relationship that existed between the Irish population and the state under which they lived from the War of the Two Kings (1689-1691) to the Great Famine (1845-1849). Particular attention is paid to an understanding of the legal character of the state and the reach of the rule of law, with contributors addressing such themes as: how law was made and put into effect; how ordinary people experienced the law and social regulations; how Catholics related to the legal institutions of the Protestant confessional state; and how popular notions of legitimacy were developed. These themes contribute to a wider understanding of the nature of the state in the long eighteenth century and will therefore help to situate the study of Irish society into the mainstream of English and European social history.

Contents: The laws in Ireland, 1689-1850: a brief introduction, Michael Brown and SeÃ¡n Patrick Donlan; Local courts in later 17th- and 18th-century Ireland, T.C. Barnard; The Privy Council of Ireland and the making of Irish law, 1692-1800, James Kelly; 18th-century Ireland's legislative deficit, W.N. Osborough; The limits of English influence on the Irish criminal law and the boundaries of discretion in the 18th-century Irish criminal justice system, Neal Garnham; English and Irish jury laws: a growing divergence 1825-1833, Niamh Howlin; 'Let the law take its course': punishment and the exercise of the prerogative of mercy in pre-Famine and Famine Ireland, Richard McMahon; The Ouzel Galley Society in the 18th century: arbitration body or drinking club?, Lisa Marie Griffith; Dublin Corporation and the levying of tolls and customs, c.1720-c.1820, Jacqueline Hill; Regulating the market: Parliament, corn and bread in 18th-century Ireland, Eoin Magennis; Ireland's urban houghers: moral economy and popular protest in the late 18th century, Martyn J. Powell; 'Regular obedience to the laws': Arthur Browne's prelude to union, SeÃ¡n Patrick Donlan; Daniel O'Connell and the Magee trials, 1813, Patrick M. Geoghegan; Farmer and fool: Henry Brooke and the late Irish Enlightenment, Michael Brown; The legal system in Ireland and the Irish language 1700-c.1843, Lesa Ni Mhunghaile; A court 'for the determination of causes civil and maritime only': Article 8 of the Act of Union 1800 and the Court of Admiralty in Ireland, Kevin Costello; Index.

'... this book not only succeeds in providing a series of valuable individual essays but also, thanks to the editor’s excellent introduction and wider guiding principles, provides a coherent volume that is greater than the sum of its parts. It will be essential reading for all scholars who want fully to understand Irish society in the long eighteenth century.' Journal for Eighteenth-Century Studies '... a tour de force ... it provides an excellent introduction to legal systems in eighteenth- and nineteenth-century Ireland and a valuable guide to issues such as legal reform and civic governance among many others. The detailed and highly readable introduction sets the tone for the essays that follow.' European History Quarterly