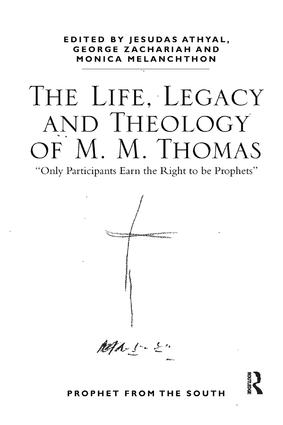 The Life, Legacy and Theology of M. M. Thomas

'Only Participants Earn the Right to be Prophets', 1st Edition

M.M. Thomas was one of the chief architects of the modern ecumenical movement. An outstanding theologian, his original and rather unconventional explorations into ecumenical social ethics remain highly relevant even today. Long before liberation theology burst on the scene, Thomas raised his prophetic voice for the liberation of humanity from the dehumanizing structures. Focusing on the theological and social contributions of M.M. Thomas and his legacy for our times, and published with the support of the Council for World Mission to coincide with the centenary of Thomas' birth, this collection brings together an international panel of distinguished scholars, theologians and church leaders.

Jesudas M. Athyal was the Associate Professor of Social Analysis and Dalit Theology at the Gurukul Lutheran Theological College, Chennai, India. He is the co-author of Understanding World Christianity: India (Minneapolis: Fortress Press, 2016), the Editor of Religion in Southeast Asia: An Encyclopaedia of Faiths and Cultures (Santa Barbara, CA: ABC-CLIO, 2015) and the Associate Editor of Oxford Encyclopaedia of South Asian Christianity – 2 vol. (New Delhi: OUP, 2012).

is the Professor in the department of Theology and Ethics at the United Theological College, Bangalore, India. He is the author of Alternatives Unincorporated: Earth Ethics from the Grassroots (London: Equinox Press, 2011).

teaches Old Testament/Hebrew Bible at the Pilgrim Theological College, University of Divinity, Melbourne, Australia. She is the author of, "Protect me from those who are violent!" – Psalm 140: A Cry for Justice, A Song of Hope" in Singing the Songs of the Lord in Foreign lands: Psalms in Contemporary Lutheran Interpretation, LWF Documentation Series (59/2014) and, "Engaging Women’s Experiences in the Struggle for Justice, Dignity, and Humanity: Hebrew Bible Readings by South Asian Women" in With the Eyes of a Woman: A Retrospective of Feminist Contextual Readings of the Hebrew Bible.