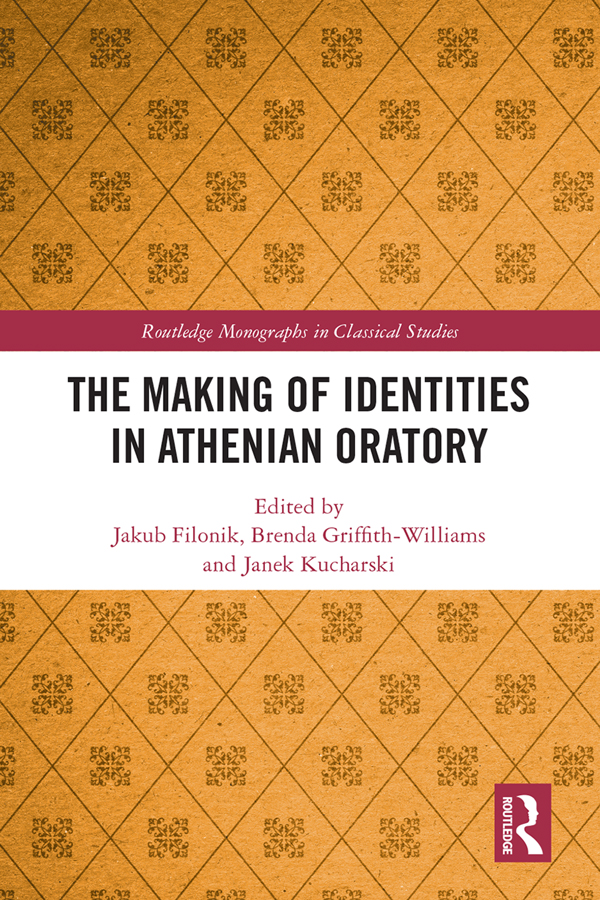 The Making of Identities in Athenian Oratory

Focusing on extant speeches from the Athenian Assembly, law, and Council in the fifth–fourth centuries BCE, these essays explore how speakers constructed or deconstructed identities for themselves and their opponents as part of a rhetorical strategy designed to persuade or manipulate the audience.

According to the needs of the occasion, speakers could identify the Athenian people either as a unified demos or as a collection of sub-groups, and they could exploit either differences or similarities between Athenians and other Greeks, and between Greeks and ‘barbarians’. Names and naming strategies were an essential tool in the (de)construction of individuals’ identities, while the Athenians’ civic identity could be constructed in terms of honour(s), ethnicity, socio-economic status, or religion. Within the forensic setting, the physical location and procedural conventions of an Athenian trial could shape the identities of its participants in a unique if transient way.

The Making of Identities in Athenian Oratory

is an insightful look at this understudied aspect of Athenian oratory and will be of interest to anyone working on the speeches themselves, identity in ancient Greece, or ancient oratory and rhetoric more broadly.

IntroductionJakub Filonik, Brenda Griffith-Williams, and Janek Kucharski Part 1: The politics of naming and individuals’ rhetorical identities 1. Civic and local identities in Athenian rhetoric Roger Brock 2. The two Mantitheuses in Demosthenes 39 and [Demosthenes] 40: a case of Athenian identity theft? Brenda Griffith-Williams 3. Constructing the identity of Timarchus in Aeschines 1 Rosalia Hatzilambrou 4. Constructing gender identity: women in Athenian trials Konstantinos Kapparis Part 2: The rhetorical construction of civic identities 5. Athenian identity and the ideology of autochthony: an institutionalist approach Matteo Barbato 6. Lysias and the rhetoric of citizen honour Benjamin Keim 7. Archaism, performance, and civic status in Lysias 10 Against Theomnestus Alex Petkas 8. Seeing others as Athenians in Demosthenes’ third Philippic Judson Herrman Part 3: Social and material dimensions of Athenian identities 9. The rich and the poor, conflicts and alliances: socio-economic identities and their uses in the Demosthenic corpus Lucia Cecchet 10. Prosecutorial identities and the problem of relevance Janek Kucharski 11. Space, place, and identity in Antiphon On the Murder of Herodes Christine Plastow. Index Index locorum

Jakub Filonik is Assistant Professor of Classics at the University of Silesia in Katowice, Poland.

is Honorary Research Associate in the Department of Greek and Latin at University College London, UK.

is Assistant Professor of Classics at the University of Silesia in Katowice, Poland.