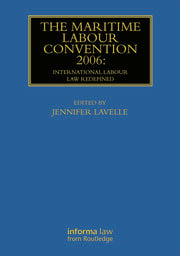 With the Maritime Labour Convention  now in force (as of August 2013), the shipping industry is faced with a new international convention that has comprehensive implications across all sectors. This vital text provides timely analysis and thought-provoking essays regarding the Convention’s application and enforcement in practice.

Hailed as the "Seafarer’s Bill of Rights" and the "fourth pillar" of the international regulatory regime for quality shipping, the Maritime Labour Convention is set to significantly alter the playing field for key stakeholders. This book offers diverse and interesting commentary in respect of the Convention’s impact on core sectors of the shipping industry, identifying both strengths and weaknesses of the Convention, as well as potential hurdles that will need to be overcome. Each chapter focuses on a different aspect of the Convention, ranging from individual rights of the seafarer to challenges of flag State implementation. Special attention is given to enforcement through examination of the innovative measures provided in the Convention itself, along with discussion of domestic enforcement mechanisms in certain States. Furthermore, the book evaluates whether the Convention has filled existing gaps in maritime labour law, resolved prior difficulties or created new problems.

Jennifer Lavelle is a Post-Graduate Researcher and Tutor in Law, Law School, University of Southampton. Her research primarily focuses on private international law and marine insurance, as well as maritime labour law. Jennifer is also a member of the Insurance Law Research Group, University of Southampton, and Gray’s Inn, London, as well as the general editor and co-founder of www.aviationlaw.eu

Ariadne Abel is an Associate Economic Officer at the United Nations Economic Commission for Europe Secretariat.

Dr Adrian Attard is a lawyer with Fenech and Fenech Associates, where he specialises in Maritime Law and Marine Litigation.

Dr Paul Gonzi is also a lawyer with Fenech and Fenech Associates, where he specialises in computer and communications law

Dr John A C Cartner is a is practicing maritime lawyer, a designated Proctor in Admiralty, a chartered naval architect, has had several commands of oceanic tank and container vessels, and is a current licensee of the U. S. Coast Guard as Master of Steam and Motor Vessels of any Gross Tons upon Oceans with endorsements including STCW.

Mateusz Bek is a Research Fellow with the Insurance Law Research Group at the University of Southampton. He focuses on Maritime Law, with particular emphasis placed upon Carriage of Goods by Sea, International Trade Law, Marine Insurance and Yachting Law.

Denis Nifontov  graduated from the University of Bristol in 2008, having studied for an LLB in Law and German, during which he spent a year in Germany studying at the Faculty of Law of the University of Göttingen. Denis then proceeded to read for an LL.M (Maritime Law) at the University of Southampton. Since graduating, Denis has been working in the Marine Insurance industry in the UK.

R Graham Caldwell is a PhD candidate at University of Southampton, currently on sabbatical whilst acting as contract manager for Titan Salvage on the Costa ‘Concordia’ Wreck Removal Project. Graham was called to the Bar at Middle Temple in September 2010.

Dr Alexandros X.M. Ntovas Lecturer at the University of Southampton Law School, where he teaches in the areas of Public International and European Law, with emphasis on dispute settlement and environmental law. He is also Member of the Institute of Maritime Law where he researches and provides legal consultancy on navigational freedoms and practice as well as on issues regarding public aspects of piracy and other issues of contemporary safety and security of ships.

Julie Carlton (Seafarer Safety and Health Manager in MCA) is responsible for implementing the MLC in UK legislation.

Neil Atkinson (Audit Operations Lead) is responsible for putting in place arrangements for the practical implementation of the MCA (e.g. training of surveyors and arranging MLC inspections).

"This book is likely to prove an important resource, particularly in the UK and Europe, for those seeking to implement the MLC. It contains a wealth of valuable observations and useful detail." - Review by Tonia Novitz, University of Bristol, UK, for Lloyd's Maritime and Commercial Law Quarterly (2014)