The Materiality of Color
The Production, Circulation, and Application of Dyes and Pigments, 1400–1800 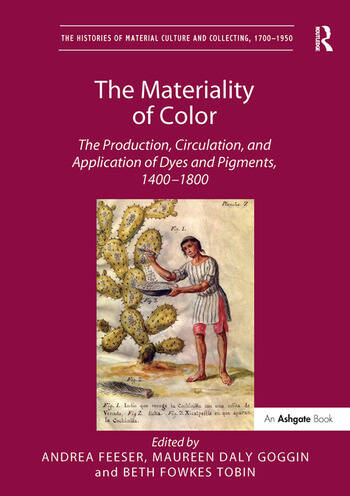 The Materiality of Color: The Production, Circulation, and Application of Dyes and Pigments, 1400–1800

Although much has been written on the aesthetic value of color, there are other values that adhere to it with economic and social values among them. Through case studies of particular colors and colored objects, this volume demonstrates just how complex the history of color is by focusing on the diverse social and cultural meanings of color; the trouble, pain, and suffering behind the production and application of these colors; the difficult technical processes for making and applying color; and the intricacy of commercial exchanges and knowledge transfers as commodities and techniques moved from one region to another. By emphasizing color's materiality, the way in which it was produced, exchanged, and used by artisans, artists, and craftspersons, contributors draw attention to the disjuncture between the beauty of color and the blood, sweat, and tears that went into its production, circulation, and application as well as to the complicated and varied social meanings attached to color within specific historical and social contexts. This book captures color's global history with chapters on indigo plantations in India and the American South, cochineal production in colonial Oaxaca, the taste for brightly colored Chinese objects in Europe, and the thriving trade in vermilion between Europeans and Native Americans. To underscore the complexity of the technical knowledge behind color production, there are chapters on the 'discovery' of Prussian blue, Brazilian feather techné, and wallpaper production. To sound the depths of color's capacity for social and cultural meaning-making, there are chapters that explore the significance of black ink in Shakespeare's sonnets, red threads in women's needlework samplers, blues in Mayan sacred statuary, and greens and yellows in colored glass bracelets that were traded across the Arabian desert in the late Middle Ages. The purpose of this book is to recover color's complex-and sometimes morally troubling-past, and in doing so, to restore a sense of wonder and appreciation for our colorful world. With its nuanced and complex depiction of how color operated within local contexts and moved across the globe, this book will appeal to art historians, social and cultural historians, museum curators, literary scholars, rhetoric scholars, and historians of science and technology.

'The Materiality of Color is a remarkable collection of essays on the meaning of color as found in social and cultural contexts. While the aesthetics of color is duly taken into account, the focus is on color production - technology transfer, monopolies, labor regimes, and economies of exchange. The authors make clear that the substances of color production, such as arsenic, mercury, urine, and dung, are as important as the dazzling colors they produced. Blending the histories of technologies and commodities as well as cultural and literary history, the volume makes a distinctive contribution to understanding of the global context in which the modern world of color was born.' Robert Finlay, Department of History, University of Arkansas, USA

'The principal contribution of The Materiality of Color is to deepen our appreciation of colorants as commodities and the products of human labor. Through its focus on production, readers see the hardship and complexity of manufacturing dyes and getting them to market.' CAA Reviews

'Given their wide approach, every angle the authors consider gives the topic a fresh perspective. ... a welcome addition to a complex subject, which will be suitable to the fields of history, art history, and Latin American and colonial studies.' Renaissance Quarterly