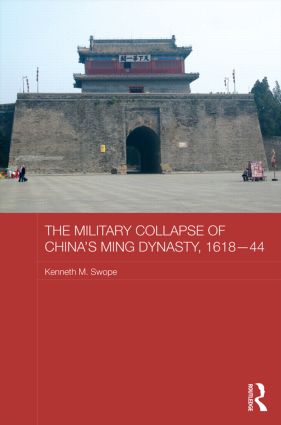 This book examines the military collapse of China’s Ming Dynasty to a combination of foreign and domestic foes. The Ming’s defeat was a highly surprising development, not least because as recently as in the 1590s the Ming had managed to defeat a Japanese force considered to be perhaps the most formidable of its day when the latter attempted to subjugate Korea en-route to a planned invasion of China. In contrast to conventional explanations for the Ming’s collapse, which focus upon political and socio-economic factors, this book shows how the military collapse of the Ming state was intimately connected to the deterioration of the personal relationship between the Ming throne and the military establishment that had served as the cornerstone of the Ming military renaissance of the previous decades. Moreover, it examines the broader process of the militarization of late Ming society as a whole to arrive at an understanding of how a state with such tremendous military resources and potential could be defeated by numerically and technologically inferior foes. It concludes with a consideration of the fall of the Ming in light of contemporary conflicts and regime changes around the globe, drawing attention to climatological factors and developments outside state control. Utilizing recently released archival materials, this book adds a much needed piece to the puzzle of the collapse of the Ming Dynasty in China.

"[T]he first systematic study of the fall of the Ming Dynasty from a military perspective…required reading for historians of the Ming and Qing. Military historians in general will find the book engaging as well. Summing Up: Highly recommended." - J Li, Columbia University, CHOICE

"This is a must-read book for anyone interested in the as yet under-researched military collapse of the Ming dynasty … never has this subject enjoyed as thorough and thoughtful a study as in Kenneth Swope's landmark book … It would be a misdirected effort to seek a single cause leading to the fall of the Ming dynasty, as Swope well knows, and reminding the reader of the intricate web of international connections is a necessary caveat. Still, while the military side is but one side of the whole story, it remains critical to a full historical assessment of the Ming demise." – Nicola Di Cosmo, The Journal of Military History

"Swope's analysis is an important contribution that highlights the various reasons for the military collapse of the Ming state. Using many archival sources he provides a fascinating synopsis of the complex events including detailed accounts of military operations, careful analysis of strategic-tactical concepts and portraits of the involved actors and their relations among each other. The book is informative and exciting and will not only attract Ming and military historians but also those who are interested in the rise and fall of the great powers." – Kai Filipiak, The Journal of Asian History

"With its narrative style, The Military Collapse of China’s Ming Dynasty will appeal to the general reader…the review of scholarly literature treating the marquee issues such as silver and climate change, confined to the end of the book, will satisfy academics. After enjoying the story, this reviewer has already begun using it as an authoritative reference book on the major events of the late Ming. Ken Swope has written an essential text." - Harry Miller, University of South Alabama, Journal of Chinese Military History 4 (2015) 207-209

Kenneth M. Swope is Professor of History and Fellow of The Center for the Study of War and Society at the University of Southern Mississippi, USA. He specializes in the military, political, and social history of Ming China, and he also conducts research in comparative early modern military history, and in East Asian international relations. His books include Warfare in China Since 1600 (2005); and A Dragon’s Head and a Serpent’s Tail: Ming China and the First Great East Asian War, 1592-1600 (2009).