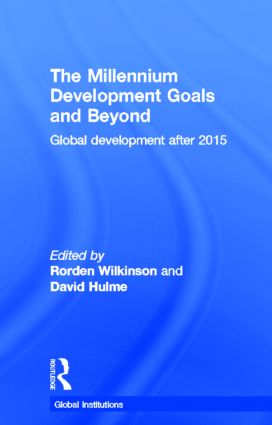 The Millennium Development Goals and Beyond

The Millennium Development Goals (MDGs) have contributed to reductions in poverty and improvements in the human condition in many parts of the world since their "invention" in 2000 and 2001. It nonetheless remains the case that today, as on all the previous days of the twenty-first century, almost one billion people will go hungry.

Debates about whether the MDGs have made a positive contribution to poverty eradication and/or whether they have achieved as much as they should have done are becoming more frequent as 2015 and the "end of the MDGs" approaches. This book highlights that active debate about what the MDGs have achieved and what that means for the crafting of a post-2015 international framework for action, must become a priority. The work begins by examining the global context of the goals from a variety of perspectives, and moves on to focus on the region that continues to be the most impoverished and which looks likely to fall short of meeting many of the MDGs: Africa.

Presenting both a broad overview of the issues and drawing together prestigious scholars and practitioners from a variety of fields, this work provides a significant contribution to debates surrounding both global poverty and the success and future of the MDGs.

Introduction Moving from MDGs to GDGs: Development Imperatives beyond 2015 David Hulme and Rorden Wilkinson Part 1: Global Context 1. Millennium Development Goals: Milestones on a long road Margaret Joan Anstee 2. Recapturing the Narrative of International Development Sakiko Fukuda Parr 3. From the Millennium to Global Development Goals Ramesh Thakur 4. Women and the MDGs: Too Little, too Late, too Gendered Sophie Harman 5. MDGs meet Religion: Past, Present, and Future Katherine Marshall 6. ECOSOC and the MDGs: What can be done? Thomas G. Weiss Part 2: Focus on Africa 7. Lessons to be Learned from the Challenges to Achieving the MDGs in Africa Craig N. Murphy 8. Africa and the MDGs: Challenges and Priorities David Hulme and Admos Chimhowu 9. Challenges to the Achievement of the MDGs in Africa Frances Stewart 10. Global Development Goals and the International HIV Response: A Chance for Renewal Ilaria Regondi and Alan Whiteside 11. Combating Poverty in Africa: 2015 and Beyond Yusuf Bangura 12. Taking Africa beyond the MDGs: The Role of Higher Education in Development H. Russel Botman

is Professor of Development Studies, Director of the Brooks World Poverty Institute (BWPI) and Head of the Institute for Development Policy and Management (IDPM) at the University of Manchester.