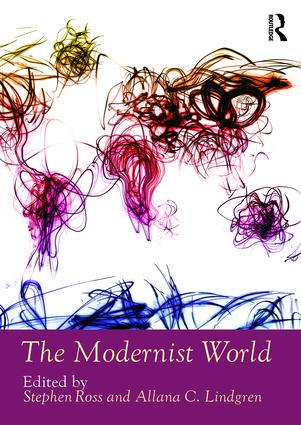 The Modernist World is an accessible yet cutting edge volume which redraws the boundaries and connections among interdisciplinary and transnational modernisms. Over 60 new essays are equally divided to address literature, visual arts, theatre, dance, architecture, music and film, with a final section drawing these together as 'intellectual currents'. The book also covers a variety of 'modernisms' from around the globe, drawing innovative links and connections to paint a picture of the 'Modernist World'. A clear and detailed introduction introduces the terrain, as well as pointing out the plurality and adaptability of the area. The Modernist World is essential reading for both beginners and more advanced scholars in the area - offering clear introductions alongside new and refreshing insights.

"The Modernist World is the latest effort in the ongoing and collaborative project of mapping modernisms around the world. Spanning eight geographical regions and covering film, theater, literature, the visual arts, dance, music, and architecture in each region, Ross and Lindgren establish vital convergences and divergences among interdisciplinary modernisms. What emerges is less a singular understanding of modernism than an appreciation of the provisional, strategic and situation-specific nature of the many modernisms. Encompassing a huge swathe of artistic activity, The Modernist World presents modernisms’ many permutations: their different goals, formal strategies, and periodization. This volume makes a truly magnificent contribution to global modernist studies." Laura Winkiel, University of Colorado Boulder, USA

"The Modernist World is a remarkable and timely volume. Unique in its multidisciplinary and geographical range, this collection of over fifty essays offers a truly global account of modernist cultural production. More than that, it investigates the shifting signification of the term ‘modernism’ itself as it moves across continents and art forms. It will certainly become an indispensable resource for students and scholars working in the ‘new modernist studies’." Anna Snaith, Professor of Twentieth-Century Literature, King’s College London, UK

"Over the course of the last decade, scholars have repeatedly urged that modernism should be approached as a global phenomenon rather than just a European or North American accomplishment. And yet incredibly, there has never been a synoptic reference work to which students might have turned to broaden their horizons. The present compilation is thus long overdue: geographically and thematically comprehensive, it will make its mark on the field for many years to come!" Tobias Boes, University of Notre Dame, USA

"Because of its excellent breadth and variety, this important collection does more to show the reorientation in modernist studies since the turn of the century than any other volume currently available." Peter Childs, Newman University, UK

Stephen Ross is Associate Professor in the English department at the University of Victoria, Canada. He has published widely on Modernism and is General Editor of the Routledge Encyclopedia of Modernism.

Allana Lindgren is Associate Professor in the Theatre department at the University of Victoria, Canada. She has published widely on Modernism, Theatre History and Dance.

The Routledge Worlds are magisterial surveys of key historical epochs, edited and written by world-renowned experts. Giving unprecedented breadth and depth of coverage, they are the works against which all future books on their subjects will be judged and are essential reading for anyone with a serious interest in the subject.