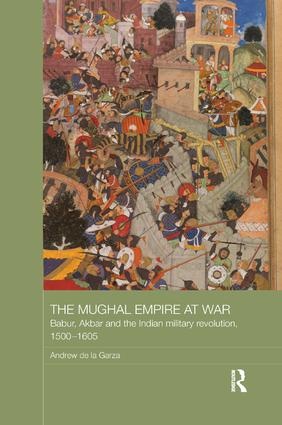 The Mughal Empire at War

The Mughal Empire was one of the great powers of the early modern era, ruling almost all of South Asia, a conquest state, dominated by its military elite. Many historians have viewed the Mughal Empire as relatively backward, the Emperor the head of a traditional warband from Central Asia, with tribalism and the traditions of the Islamic world to the fore, and the Empire not remotely comparable to the forward looking Western European states of the period, with their strong innovative armies implementing the “military revolution”. This book argues that, on the contrary, the military establishment built by the Emperor Babur and his successors was highly sophisticated, an effective combination of personnel, expertise, technology and tactics, drawing on precedents from Europe, the Middle East, Central Asia and India, and that the resulting combined arms system transformed the conduct of warfare in South Asia. The book traces the development of the Mughal Empire chronologically, examines weapons and technology, tactics and operations, organization, recruitment and training, and logistics and non-combat operations, and concludes by assessing the overall achievements of the Mughal Empire, comparing it to its Western counterparts, and analyzing the reasons for its decline.

Andrew de la Garza is an Instructor in the Department of History and Geography at the University of Louisiana at Lafayette, US.