The National Interest on International Law and Order 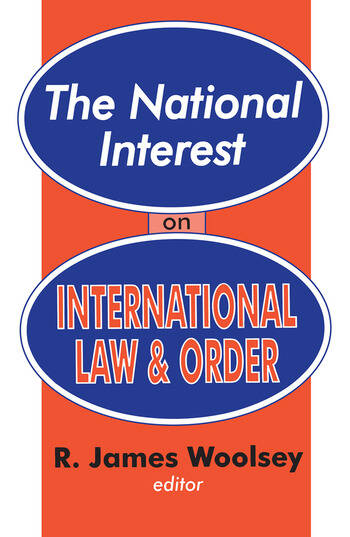 The National Interest on International Law and Order

International law and the nature of the global order is regularly examined and debated among specialists. This volume brings together in one place twenty-four articles addressing these subjects, written by some of America's leading academics, lawyers, and policymakers, and originally published in The National Interest, a leading realist journal of international affairs.Prominent jurists, lawyers, and practitioners debate the role that international law should play in the formulation of policy in the first section, and whether 'international law' really exists. Authors explore such questions as the enforceable norms of global behavior, and if American foreign policy should conform to such regulations. A second section looks at the viability and utility of international institutions in advancing U.S. interests. Included are debates over the role and purpose of the United Nations and the International Criminal Court. A third Section deals with the intersection of law enforcement and foreign policy. It explores such questions as whether primary responsibility for combating global terrorism and the international drug trade should be vested with law enforcement agencies or whether it should fall under the purview of foreign policy.The final portion of the book is devoted to the question of human rights, particularly the tripartite debate between Robin Fox, Francis Fukuyama, and William F. Schulz over the nature and origins of human rights. Among the questions considered are whether human rights are an outgrowth of natural law, or are natural imperatives at odds with protecting individual dignities and freedoms. Is there a universal standard of rights, or are human rights norms derived from majority consensus?The list of distinguished contributors to this volume include John Bolton, Robert Bork, Lee Casey, Douglas Feith, Owen Harries, Senator Jesse Helms, Alan Keyes, Irving Kristol, Joseph Nye, Jeremy Rabkin, David Rivkin, Alfred P. Rubin, and Abrahama Sofaer. This volume will be of interest to legal scholars, political scientists, and students of diplomacy and international relations.