The Nature and Method of Economic Sciences
Evidence, Causality, and Ends 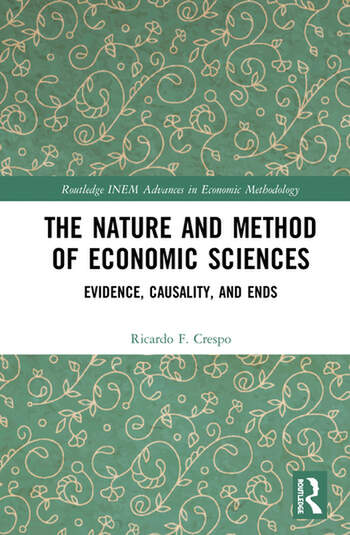 The Nature and Method of Economic Sciences: Evidence, Causality, and Ends

The Nature and Method of Economic Sciences: Evidence, Causality, and Ends argues that economic phenomena can be examined from five analytical levels: a statistical descriptive approach, a causal explanatory approach, a teleological explicative approach, a normative approach and, finally, the level of application.

The above viewpoints are undertaken by different but related economic sciences, including statistics and economic history, positive economics, normative economics, and the ‘art of political economy’. Typically, positive economics has analysed economic phenomena using the second approach, causally explaining and often trying to predict the future evolution of the economy. It has not been concerned with the ends selected by the individual or society, taking them as given. However, various new economic currents have emerged during the last 40 years, and some of these do assign a fundamental role to ends within economics. This book argues that the field of positive economics should adapt to deal with the issues that arise from this. The text attempts to discern the nature of economic phenomena, introducing the different approaches and corresponding economic sciences. It goes on to analyse the epistemological characteristics of these in the subsequent chapters, as well as their disciplinary interrelations.

This book is a valuable resource for students and scholars of the social sciences, philosophy, and the philosophy of economics. It will also be of interest to those researching political economy and the development of economic thought.

Ricardo F. Crespo is Professor at the IAE Business School, Universidad Austral, Argentina, and at the Philosophy Department, Universidad Nacional de Cuyo, Argentina. He is also a Researcher at CONICET (Argentina’s National Council of Scientific and Technical Research).