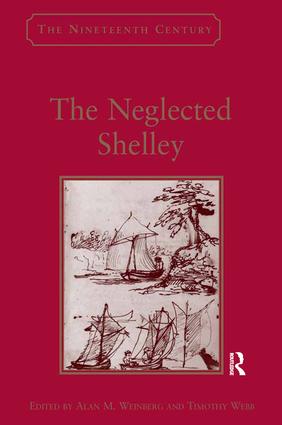 New editions and facsimiles of Percy Bysshe Shelley's works are changing the landscape of Shelley studies by making complete compositions and fragments that have received only limited critical attention readily available to scholars. Building on the work begun in Weinberg and Webb's 2009 volume, The Unfamiliar Shelley, The Neglected Shelley sheds light on the breadth and depth of Shelley's oeuvre, including the poet's earliest work, written when he was not yet twenty and was experimenting with gothic romances, and other striking forms of literary expression, such as two collections of provocative verse. There are discussions of Shelley's collaboration with Mary Shelley in the composition of Frankenstein, and his skill as a translator of Greek poetry and drama, reflecting his urgent concern with Greek culture. His contributions to prose are the focus of essays on his letters, the subversive notes to Queen Mab, and his complex engagement with Jewish culture. Shelley's considerable corpus of fragments is well-represented in contributions on the later narrative fiction, 'Athanase'/'Prince Athanase', and the significant group of unfinished poems, including 'Mazenghi', 'Fiordispina', 'Ginevra' and 'The Boat on the Serchio', that treat Italian topics. Finally, there are explorations of subtle though neglected or underestimated works such as Rosalind and Helen, The Sensitive-Plant, and the verse-drama Hellas. The Neglected Shelley shows that even the poet's apparently slighter works are important in their own right and are richly instructive as expressions of Shelley's developing art of composition and the diverse interests he pursued throughout his career.

'These erudite and critically attentive essays convince us of the lasting significance of Shelley’s less familiar poetical and prose works, as much as they render unfamiliar the better known passages and ideas in Shelley’s poetry and prose. With assured critical purpose, the collection challenges and revises our preconceptions about Shelley’s attitudes towards antiquity, European culture, the gothic, nationhood, and ethnicity, as well as his practices as a poet and commitment to the medium of prose. The Neglected Shelley signals vitally innovative directions in the field of Shelley studies for years to come.' - Mark Sandy, Durham University, UK

'All in all, these essays comprise an impressive range of material and testament to the extraordinary breadth of Shelley’s achievement as a writer. And without doubt, these innovative, carefully-researched essays succeed in the editors’ aim of bringing within the pale of Shelley studies neglected aspects of his work and of illuminating unfamiliar aspects of ostensibly well-known or canonical pieces.' - Cian Duffy, Copenhagen University, European Romantic Review, 27:4