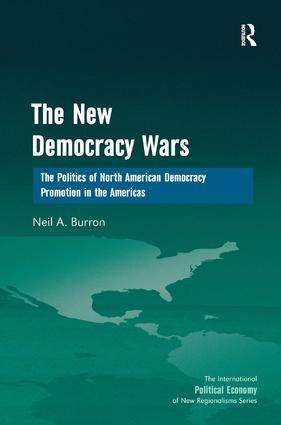 The Politics of North American Democracy Promotion in the Americas, 1st Edition

Burron provides a critical analysis of Canadian and US democracy promotion in the Americas. He concentrates on Haiti, Peru, and Bolivia in particular but situates them within a larger analysis of Canadian and US foreign policy - bilateral and regional - in the areas of trade, investment, diplomacy, security and, for the United States, the war on drugs. His main argument is that democracy promotion is typically formulated to advance commercial, geopolitical and security objectives that conflict with a genuine commitment to democratic development. Given this broad scope, the book is well positioned to contribute to a number of debates in comparative Latin American politics and international political economy (IPE) with a focus on North-South relations in the hemisphere.

’With regional breadth to be envied and country depth to be revered, Neil Burron has produced an impressive study of democracy promotion� in the Americas. All scholars in and beyond Latin American studies should pick up and engage with The New Democracy Wars for its powerful and clarifying arguments on the uneven contexts of the spread of capitalism and liberal democracy in today’s world order.’ Adam David Morton, University of Nottingham, UK ’Burron's penetrating analysis highlights contradictions between platitudes and practices in parts of the democracy promotion landscape of the Americas. With solid theoretical grounding in International Political Economy and Comparative Politics, Burron provides intellectual value-added not just for political pundits and policy practitioners in the Americas, but also for individuals laboring in the political change vineyards in other parts of the world. ’ Ivelaw Lloyd Griffith, York College, City University of New York, USA ’Invaluable insight into U.S. and Canadian democracy promotion� policies in Latin America. Burron shows that both countries have developed their policies in an effort to safeguard elite rule in the face of resurgent social movements and the recent turn to the left. Must reading for anyone interested in the future of hemispheric relations and world order.’ William I. Robinson, University of California at Santa Barbara, USA 'This is a well-written, accessible book which, in an admirable way, is broad in scope (empirically and theoretically) and short in number of pages (148, excluding the bibliography).' Journal of Latin American Studies

Neil Burron completed a PhD in political science at Carleton University. He has worked in the field of international development with various NGOs and has travelled widely in Latin America. Dr. Burron is currently working as an independent researcher in the Ottawa region.